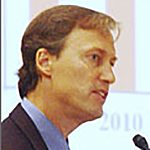 Doug is founder and CEO of North Ridge Investment Management in Larkspur, CA, which invests in clean energy technologies in the U.S. and China, and real estate in California.

Doug has a master’s in public administration from Harvard’s Kennedy School of Government (1995), a juris doctor from the University of Washington (1989) (editor, Washington Law Review), a certificate in Chinese commercial law from the East China Institute of Law and Politics (Shanghai, 1987), and a bachelor of arts from Stanford (1982).  He resides in Mill Valley, CA.