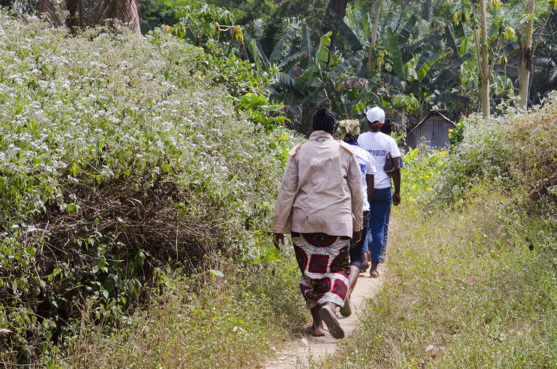 Community participation in the decentralization of advocacy is very important for ensuring strong results, but is too often given little or no attention. It is important that we support community level advocacy in order to strengthen the bottom-to-top approach, or we stand to lose the potential that community effort tends to bring to the cause of women’s rights and community development.

Reforms to the development of Liberia’s natural resource sector, particularly the forestry sector, began in 2003, when the United Nations Security Council imposed sanctions on Liberian timber on grounds that it was being used to fuel the civil crisis. The government responded in October 2006 by formulating the New Forestry Reform Law popularly known as the NFRL of 2006, which led to the lifting of the sanctions. This was a breakthrough in the history of the Liberia forestry sector, and sets the basis for local communities to actively participate and make decisions in forest and other resources governance processes in Liberia.

This appeared to be a dream come true for the communities, but the big question was “How will this become a reality”?

The ZORLAYEA Women and Youth Network took a first step when women and young people of seven communities from Slayea and Zorzor Districts in Lofa County in Liberia organized themselves into a community advocacy platform.

The platform is an informal network that started in April 2010, at the end of a leadership training conducted by the Foundation for Community Initiatives (FCI) for these community women and youth. Despite the network’s informal beginnings, members started to hold regular meetings in a particular location as decided within each community. Each community was represented by four persons, two women and two youth (1 male, 1 female). A total of seven communities are presented on the network.

The meetings provided the opportunity for the women and youth to discuss factors challenging the smooth participation of women and young people in natural resource management and design collective actions to address them.

Some of the critical issues that the meetings highlighted included lack of allocation for women in the disbursement of funds generated by the county from natural resources extraction and other sectors; the use of traditional norms to exclude women and youth from decision-making process and rights to land in the county; the need to solicit support from NGOs and other donors for adult education programs for women to develop their reading and writing skills; election of skillful women to more local leadership positions in the county; increased teenage pregnancy amongst young girls; lack of information sharing on the part of Community Forestry Development Committees (CFDCs) members on their activities around the access of funding from the Benefit Sharing Trust Fund; and respect for women’s rights more generally, especially the rights to land and other property.

Prior to the establishment of the network in 2010, the voice of community women and youth in these communities was a taboo in community level discussions. In addition to being a taboo, women and young people were considered by the community leaders as not having any concrete ideas and contributions to any community development initiatives. As a result, they suffered marginalization in a wide range of community decisions vis-à-vis their male counterparts.

In the midst of the huge challenges that youth face in rural communities, the members of this platform have been able to showcase the important role of community level advocacy and have changed the lives of many women and young people in their communities who felt that they were nobody. They have attracted huge attention from the local authorities of Lofa County, who now involve them in every discussion in their county, and both listen and take into account their views. The network won a victory for women’s rights to leadership by getting a member of the network appointed as a District Chairperson in the county, a position which gives her supervision of all of the women of Zorzor district.

Nyenpuh Paypay is the chairlady of the network and lives in Sucromu town, a short distance away from Zorzor, one of the big commercial centers in Lofa. She has no formal education and faces the many challenges that all rural women face.  She is the mother of 3 children and bread winner of the family. She is a farmer and depends on proceeds from the farm to cater for their welfare. Despite these constraints, Nyenpuh has been seen by many as a true example of a local community activist. She does not allow her limitations to weaken her advocacy activities and this has won her the favor of women in the county.

Ma Tenemah, 70, who is one of the many older women on the platform and serving as co-chairlady, narrated how she takes so much courage from the actions of Nyenpuh. “I really wish I was doing this when I was young” she lamented in one of our discussions. She is known as the book woman. “I carry my book that FCI give me everywhere I go,” she said, “and it helps me to save communities.”

“This book says you should not do anything in the forest without asking the community”. These were her words to some chain-saw millers who she interacted with after being called by a fellow community woman to intervene in an illegal entry situation into the community forest as a result of the advocacy activities of the network.

The ZORLAYEA women and youth network demonstrates that support for community level advocacy can go a long way to change the trend to a more bottom-to-top approach in advocacy in Liberia.

Julie Weah is Coordinator of the NGO Coalition of Liberia (NCL) and Executive Director for the Foundation for Community Initiatives (FCI) in Liberia. She is a member of the Visiting Professionals Women’s Land Rights Network.