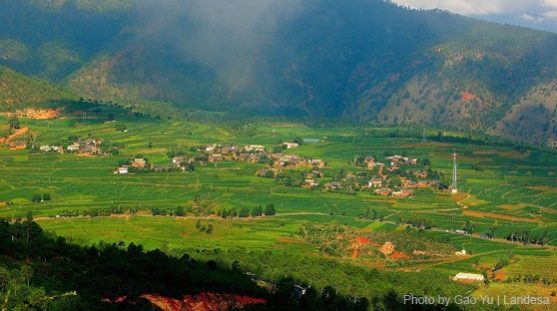 China adopts public ownership of land — that is, land is either owned by the state or collectively owned by all villagers. With respect to forestland, 40 percent is owned by the state and 60 percent by hundreds of thousands of villages nationwide. Due to the unclear property rights of the collective forests, the forest resources are not effectively developed and protected. Therefore, in 2008, the Chinese government launched a collective forestland reform by allocating use rights to 184 million hectares of collective forestland to 500 million farmers (0.368ha/farmer) to increase farmers’ family property, let farmers enjoy more forestland rights and interests, encourage farmers to plant trees and improve the ecological environment.

Reforming collective forestland rights system was conducted in two steps.  First, forestland was contracted to each household in the village for 70 years, renewable upon the expiration, in accordance with the size of the household on an equal basis.  The government issued the forest rights certificate to each household who contracted the forestland. The farmers can manage the forestland and enjoy the benefits. They can also transfer their forestland rights, or use them as capital contribution in cooperation, or as collateral for loans. By the end of 2014, forests certificates had been issued to 90 million farmer households, covering 95 percent of collective forestland nationwide.

The second stage of the reform was mainly to provide tax reduction and public services on market (selling tree products or transfer the forest land rights), technology, and finance (including loans and forestland rights mortgage) to help farmers improve the capacity of forestland production and management.

However, on these certificates, there is only the name of household head, who is in most cases a male; all other members of the household, including the female spouse of the household head, do not have their names on the certificate even though they are legally defined as joint owners of this household property: use rights to collectively owned land.  According to a sample study by the World Bank, more than 95 percent of forest rights certificates registered only in male names. Moreover, 63 percent of the women surveyed did not care about whose names are on the forest rights certificates since they did not really realize the significance of the certificates. In the absence of wife’s name on the certificate, the husband may be able to transfer household’s land rights and/or sell the trees without the consent of his wife because the certificate, the conclusive evidence of household land rights, does not have her name on it. Without their names on the certificate, women simply cannot use forestland rights as collateral for mortgage loans for forest production because banks would not recognize them as joint owners of the collateral.

Although initial allocation of forestland rights was in general gender equal, the patriarchal tradition prevents rural women from effectively enjoying forestland rights.  For example, women usually leave their parents and settle at their husband’s home after marriage, and their allocated forestland rights in the birth village have to be left to other members of the family. Moreover, although forestland rights are inheritable under Chinese laws, parents tend to designate sons as heirs because sons are traditionally regarded as financial supporters of parents when they are old.

However, there are some isolated cases of good practices toward gender equality. For example, in Pingwu of Sichuan Province, the county policy requires parents to consult sons and daughters over 18 years old when they decide to pass their forestland rights to heirs. The policy also requires that that both husband and wife sign on the transfer agreement when household forestland rights are transferred. Women can also take the forestland certificate to apply for loans even if the certificate does carry their names, as long as they can present evidence of marriage to the household head.

In summary, women are particularly vulnerable to losing their forestland. Women are playing more and more important roles in forestry development as men migrate to cities, but insecure land rights may affect their interests. Many women do not have a good understanding of their legal rights to forestland.

As forest develops and there will be more economic returns, more disputes over the forestland rights are expected. Therefore, additional and innovative policies and mechanisms need to be added to make the policies more gender sensitive under the unadjusted forestland tenure policy context in China. Awareness of land rights for women needs to be increased at all levels. Research should be conducted to explore measures to ensure women’s forestland rights, such as how to deal with household forestland rights jointly owned by all members when a woman member changes her marriage status.