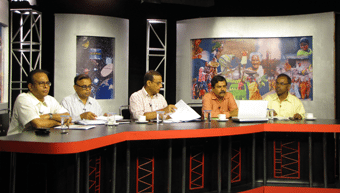 Landesa India’s team in West Bengal is now using satellite communication technology to train 2,500 officials in 341 administrative blocks across the state on how to improve their flagship program that purchases and distributes land to the poorest of the poor.

Using the  Indian National Satellite System, the largest domestic communication system in the Asia Pacific Region, Landesa experts were able to speak from a studio and reach out to some of the most remote rural areas.

The first virtual conference was held on September 4th and many more are planned given the high demand expressed by these revenue officials who work in poor and remote areas on the front lines of India’s battle against poverty. This technology allows Landesa to reach far more officials on the ground who have a direct impact on how land rights programs are implemented, which means they can serve more rural families far more efficiently.