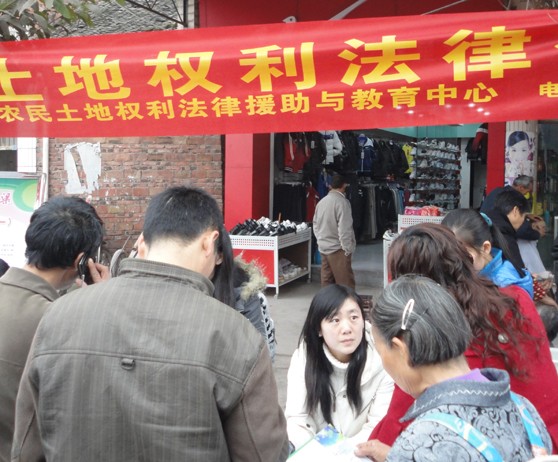 Demand for legal aid from our center is high, as staff respond to inquiries from rural farmers.

Three sisters in a remote county of Chongqing, China lost their parents in 2008.  Their grief carried an additional burden when they learned that they also had lost their inheritance rights to the forestland held and used by their parents for many years, only because each of the sisters had married husbands outside of their parents’ village. Local decision makers wrongly decided that the daughters now became members of their husbands’ villages, and were no longer eligible to claim their family’s property located in their maiden village. But Chinese laws explicitly state that unlike arable land, forestland rights may be inherited, regardless of whether daughters marry into another household in a different village.

For more than two years, the sisters tried unsuccessfully to defend their inheritance right and reclaim their forestland, along with the right to a yearly state subsidy provided by the government to land holders.

But fortunately the sisters approached the desk of legal consultation set up in a township by Landesa’s Chongqing legal aid center during one of its routine outreach activities in November 2010.  The center quickly acted on the request and sent its staff to the county to collect all information related to the claim.

With a package of well-prepared evidence and related laws, the center staff and a Landesa attorney went to the village in March 2011.  They conducted a lengthy discussion with three village officials, including the villager group leader, the administrative village director and the administrative village party secretary. Landesa staff also made a powerful presentation of existing laws and regulations to the village leaders. As a result, we managed to help these three women reach a written agreement containing the following four provisions.

1) The villager group shall give the withheld subsidy back to the three women upon signing of the agreement;

3) The villager group recognizes three daughters as legal heirs to the parents’ forestland rights, and

4) Neither the villager group nor the administrative village shall intervene lawful exercise of the inherited forestland rights by three women under any occasions. 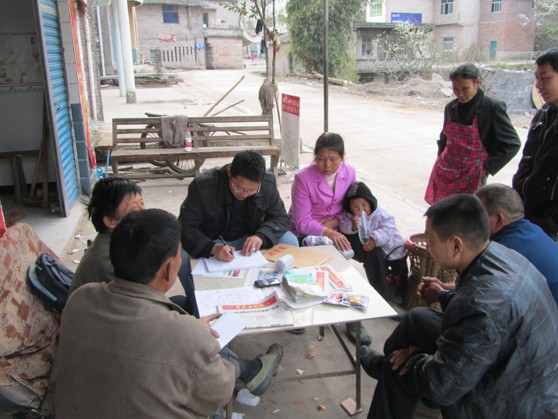 The legal aid center staff is drafting the written agreement, witnessed by village leaders (foreground) and one of the sisters (woman in pink).

Recently we witnessed the handover of the state subsidy (of more than $100) by the villager group leader to these three women, an important first case managed by our new legal aid center in Chongqing.

The plight of these three sisters is a compelling example of the importance of legal aid tailored for the rural poor, where land is typically the most precious economic and social asset.

Landesa’s staff not only helps educate farmers about their individual rights, we also advocate on their behalf to preserve those rights for generations to come.

Resources to learn more about our work in China: