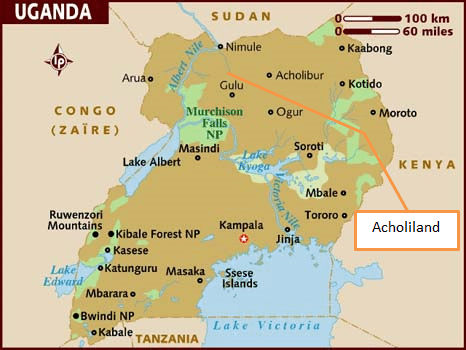 Land is the single most important asset in Northern Uganda, and forms the basis of livelihood for the vast majority of the population in the area[1].  Civil war ended in 2006 after more than 20 years of conflict that, at its peak, displaced 90-95% of the population in the Acholi region of Northern Uganda from their land into Internally Displaced People (IDP) camps [2].  Some people lived in IDP camps for decades, subsisting on food aid due to lack of access to land for production.  Widespread property destruction during the conflict meant that by the time households left camps, they had very few assets to begin rebuilding their lives[3].  In addition, many families were fractured during the conflict, resulting in a large number of female-headed households without intact ties to male relatives.  Finally, customary systems and traditional hierarchies eroded during displacement, resulting in weakened institutions and diminished capacity.  Several dimensions of the protracted conflict, coupled with the complex statutory and customary legal context in Northern Uganda, have compromised women’s ability to gain and protect access to land for homes and livelihood.

Before the war, the Acholi clan system for managing land and resources was inclusive.  Its traditional institutions, customs and social conventions ensured access to and use of land for the whole clan, including women and girls.  Since the signing of Cessation of Hostilities Agreement between the government of Uganda and the Lord’s Resistance Army[4], about 80-90% of the 1.8 million Internally Displaced Persons (IDPs) have returned to their area of origin[5].

As people move back to their land from the IDP camps it is the customary system, based on clans, which is expected to manage land distribution and management. But the clan system has been weakened, or fractured, by 20 years of conflict.  The weakening has been caused by a number of factors, all of which result in a tenuous position for women and girls’ rights to land.

The clan system was based on decisions made by the clan leaders in the interests of the clan as a whole. It relied on the authority of leaders and the complicity of the community.  But, years of living in displacement camps, separated from their most productive and important asset, has eroded the power of traditional leaders. Women and girls’ access to land – or the security of their rights to land – depends on the strength or weakness of the clan leaders and their attitudes towards women’s rights to land when women are not well connected to a living male clan member.

The war has disrupted many family relationships, and the increase in poverty due to the war has meant that some formalities which have an impact on women’s land rights, like customary marriage – were not practiced.  Whether a woman or girl will have secure rights to land can be dependent on the strength of her relationship with her “husband’s” family and clan or her father or brothers.

Moreover, clan leaders may not have legal authority over some clan land.  The practice of land-grabbing – where clan insiders or outsiders have gained private rights to communal clan land – is reportedly on the rise as the commercial value of land in Northern Uganda becomes more well-known.  For women and girls this means that even if the clan leadership is strong and organized and women and girls have land rights, these rights may be legally contested. It also means that clan leaders are suspicious of what they perceive as a threat to their land by anyone, insider or outsider alike.

Finally, because of the war, civil institutions and administration in the region are weak.  Thus, there may be little recourse for women or girls, traditionally the least powerful in a community, in the case of a dispute over land.

However, land distribution to returnees from IDP camps is ongoing in Acholiland.  Most land in Acholiland is held under customary tenure; the rules governing land use and allocation have never been written down and they are constantly changing and adapting to new circumstances.  This adaptive quality to land management and the fact of resettlement presents an opportunity to help put Acholiland’s most productive asset, land, in the hands of the Acholi daughters.

[1] Zevenbergen, J.A., D.H.M. Hilhorst, and E. Nsamba-Gayiiya. 2012. Increasing Tenure Security in Northern Uganda – How to use external support for strengthening bottom up approaches. Paper prepared for presentation at the Annual World Bank Conference on Land and Poverty. The World Bank, Washington, DC, April 23-26, 2012.

[4] See Internal Displacement Monitoring Center, “Uganda: Returns Outpace Recovery Planning.  A profile of the internal displacement situation,” 19 August, 2009, Internal Displacement Monitoring Center, Norwegian Refugee Council, Geneva Switzerland. Conflict in Northern Uganda: The Lord’s Resistance Army (LRA), a self-proclaimed Christian rebel army in the northern part of Uganda and parts of Sudan, has operated in northern Uganda in since 1987.  The LRA is an armed rebellion against the government of Uganda and the fighting between the LRA and the Ugandan government represents one of the longest running conflicts in Africa.  The LRA is led by Joseph Kony who claims to be the “spokesperson” of God and a spirit medium, primarily of the Christian Holy Spirit which the Acholi believe can represent itself in many manifestations. The LRA has been accused of widespread human rights violations including murder, abduction, mutilation, sexual enslavement of women and children, and the use of child soldiers.  Up to 1996 some people in the Acholi sub-region fled their villages as a direct result of LRA attacks, but the main cause of the subsequent large scale displacement was the government’s decision that year to force civilians into IDP camps which it described as “protected villages.” While the security situation in northern Uganda has improved since the signing of the Cessation of Hostilities Agreement in 2006, the LRA has increasingly presented a regional security threat.

[5] Id., at 8-11. In 2008, the government issued Camp Phase Out Guidelines and Guidelines for the Demolition of Abandoned Structures, and government has begun to withdraw its support for camps.  At the same time, since international relief agencies are also phasing out assistance.