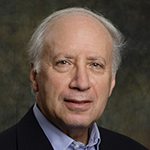 Matthew Nimetz is an Advisory Director of General Atlantic LLC, where he previously served as Chief Operating Officer and Managing Director for twelve years. Before joining General Atlantic, Nimetz was a partner and former chair of the law firm of Paul, Weiss, Rifkind, Wharton & Garrison in New York City. He had previously practiced law as an associate and partner of Simpson Thacher & Bartlett. He served as Under Secretary of State for Security Assistance, Science, and Technology and as a Counselor of the Department of State under President Jimmy Carter and earlier on the White House staff of President Lyndon Johnson. He is on the board of several nonprofit organizations and universities. He received degrees from Williams College, Harvard Law School, and Oxford University, where he was a Rhodes Scholar.