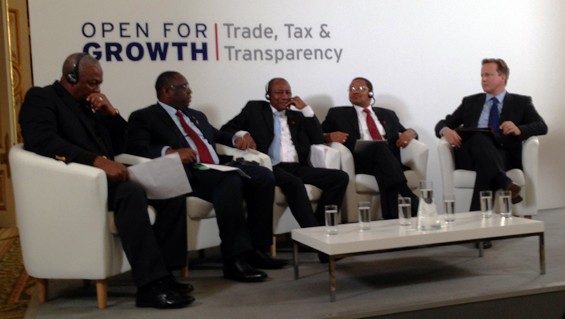 UK Prime Minister with Presidents of Ghana Senegal Guinea and Tanzania at G8 Event on Trade, Tax and Transparency.

London, 15 June 2013 — Recently in Uganda, I met Esther, a young widow with multiple children, farming a few acres of land.  Esther’s rights to land – her most important asset – are not secure.  Her land rights are rooted in custom and are neither clear nor formalized.  Esther worries every day about others grabbing her land – whether they are more powerful people from within her community or outsiders.  Esther lives a vulnerable, insecure existence, and unfortunately she is not alone.   Because hundreds of millions of other poor farmers across Africa, Asia and Latin America lack secure rights to the land on which they depend.

Today we are presented with an enormous and urgent opportunity to help Esther and other poor farmers like her and it comes from a most unlikely source: the global rush to invest in farmland.

This rising investment presents both tremendous potential and significant risks.  It has the potential to help smallholder farmers grow more food, to boost country’s efforts to feed and benefit their people, and to allow businesses to responsibly benefit from and help drive inclusive growth.

But the global land rush also carries the enormous risk of displacing poor farmers like Esther and violating legitimate land rights.  And in fact, these risks have been realized in far too many settings.

So, how can we ensure that profit and development don’t become mutually exclusive?  At least three things are essential.  First, focus efforts on smallholder farmers.  Don’t get caught up in the deception that large-scale mechanized agriculture is the primary solution.

Second, recognize, document and protect legitimate land rights where investments are being made –especially for the poor and especially for women who are  increasingly responsible for farming but rarely own land.

Third, conduct better due diligence around investments to ensure that legitimate land rights are not violated, but rather protected and strengthened.

My organization, Landesa, partners with governments and others to help develop legal frameworks and programs that provide secure land rights to all, but especially to poor farmers like Esther.  Landesa has done this work in more than 50 countries.

Building a transparent, fair property rights system is a key element to the “golden thread” of successful development that can alleviate poverty and drive prosperity.

Landesa is committed to working with other NGOs, with governments, with donors, and with companies to develop user-friendly and country-specific “Playbooks” —  playbooks for governments and for companies.  Good work already underway on Land Governance Assessment Frameworks creates a foundation for government playbooks to help build and implement legal frameworks for good land governance; and those efforts deserve more support.

We are also committed to working with responsible companies on private sector playbooks that provide practical and setting-specific due diligence  to ensure that investments are helping and not harming poor farmers like Esther, while at the same time mitigating business risks and leading to responsible profits.

Working together to create and use playbooks to operationalize the Voluntary Guidelines is a necessary next step.  But we all have yet another important opportunity to make even further gains: And that is to incorporate land rights protection into the post-2015 development goals.

Landesa has been involved in these efforts and we were pleased to see that the recent High-Level Panel report co-chaired by the UK, Liberia and Indonesia prominently called out secure land rights for women and men as a desired target in the post-2015 framework.

Let’s join efforts to incorporate land rights explicitly into the post-2015 Development Framework and to create and implement Playbooks to operationalize the Voluntary Guidelines.  Esther – and hundreds of millions of other poor smallholders – require it.