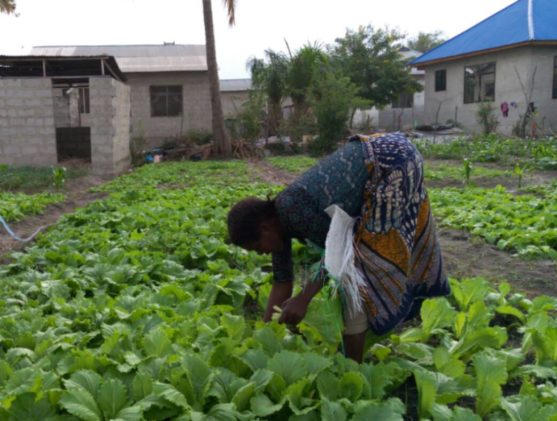 Tanzania plans to be an industrialized country by 2025, and the government’s efforts are currently promoting industrial activities from small to large scale. Special attention is on the increase to agricultural productivity.

However, it may be impossible for the government to meet this goal of industrialization, and other commitments like the United Nations Sustainable Development Goals (SDGs), unless women are granted equal inheritance rights alongside men.

As we know that Land is the source of everything. Today many studies show that women undertake almost half of the agriculture labour; securing land to women will benefit their families as well as the nation at large.

One good is example is from a widow, Prisca Magesa, who lives in Kipunguni Ilala.

Prisca’s husband died more than 10 years ago. Like many other widows in Tanzania, she lost everything after the death of her husband, including the land. Prisca and her two children suffered a lot, and it was difficult for her to pay for her children’s education and secure food for the family.

But Prisca started renting some land and now she cultivates vegetables and sells them in the market. It was through this business that Prisca was able to pay her children’s school fees and earn some money for the family’s living. The profits from this vegetable business enabled Prisca to buy her own land and currently she has started to build her own house.

It has taken more than ten years for Prisca to be in a position of securing her own land. Imagine, instead, if she had been able to inherit land from her husband or her parents? Imagine if she had been able to invest all her efforts in developing her own land from the beginning? How much better would her family and the country have been as a result? Imagine if there were millions of women like Prisca doing this kind of work – how much better off would the country be?

Tanzania is one of the African developing countries with abundant investment opportunities; agriculture being among them. Agricultural productivity is regarded as the backbone of the national economy, whereby at least 70 percent of the Tanzanians who are living in rural areas are wholly depending on agriculture. Many actors in this economic subsector in rural areas are women. Securing land tenure for women through Inheritance is therefore important for the country to eradicate poverty, end hunger and promote good health and well-being to achieve the SDGs.

Tanzania has made good progress in protecting the land rights of women. This includes ratifying international and regional instruments such as the Convention on the Elimination of All Forms of Discrimination Against Women and the African Charter on Human and People’s Rights on the Rights of Women (Maputo Protocol). These instruments prohibit any form of discrimination and require Member States to ensure that all laws and policies do not discriminate women. The Declaration on Land Issues and Framework and Guidelines on Land Policy adopted by the African Union provides direction on ways to improve legislation governing land and inheritance across Africa.

The Constitution of the United Republic of Tanzania, 1977, provides for equal rights to property for women and men. Likewise, The Land Act Number 4 of 1999 and the Village Land Act Number 5 of 1999 provide for ownership of land for women

However, Tanzania’s women still suffer with discrimination in both laws and practices. The Customary Laws of Inheritance of 1963 prohibits women, widows and daughters from inheriting land. This makes the law a major bottleneck for the country to reach its goal of a middle-income economy.

Lack of secure ownership of land contributes to the lack of identity of women as farmers, leaving women less able to engage effectively with agricultural extension services and in decision making in farming.  Women do not have the same opportunities as men to improve farming and contribute to the economy, which in turn leads to lower productivity and limited opportunities to increase resources and investments.  Legal reform to improve women’s inheritance rights is therefore required to improve socio-economic outcomes for women and the country at large.

If women, who make up the majority of agricultural workers, are denied rights to access, use, control and own land by way of inheritance, and consequently if women lack information and services related to agriculture, they cannot contribute the same way to economic growth as men can. This is a missed opportunity.

The plans and implementation of the industrialization economy depends largely on the participation and full engagement of women.

This can happen if the government uses a gender lens on this issue. By enacting fair and gender responsive Inheritance laws, which ensure that women’s land tenure is secured, agricultural productivity will be increased and improved. This is essential to improve the livelihoods of the individual, family, community and society, and for the country to realize its vision of transformative industrialization.

Anna Meela Kulaya is the Deputy National Coordinator of Women in Law and Development in Africa (WiLDAF) Tanzania and a member of the Visiting Professionals Women’s Land Rights Network.