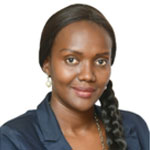 Anna Meela Kulaya has spent almost twenty years serving her community through her work in the legal sector. Ms. Kulaya graduated with a Bachelor of Laws from the University of Dar es Salaam in 2000 before continuing her education and receiving a diploma in Human Rights and Humanitarian Law from the Raoul Wallenberg Institute in Lund, Sweden, an international diploma in Leadership Development from St. Francis Xavier at the Coady Institute Canada, and a Master in Migration and Refugee Laws from the University of Dar es Salaam.

Ms. Kulaya began working for Women in Law and Development in Africa (WiLDAF) in 2001 as a legal. Now, she is the Deputy National Coordinator of WiLDAF Tanzania, a supervisory role, where she manages a team of 10 people over 10 sub grant partnerships.

Ms. Kulaya presently serves a board member of a network for legal aid providers (TANLAP). Ms. Kulaya coordinated the 16 Days of Activism Against GBV in Tanzania, now a national movement.