FAQs and Answers about the Global Land Rush

FAQS and Answers about the Global Land Rush

What is the “global land rush”?

The global land rush refers to the purchase, lease, or concession of land that typically moves the land from traditional uses, such as smallholder farms or communal grazing, to commercial uses, often on a large-scale.  These transactions have caused many rural land users to lose the most important resource for their livelihood—their land.

Although commercial land transactions are not new, the scale of some recent deals and the growing pressure on land resources are unprecedented.  Several factors drive the demand for land.  Recent data show that agricultural production, including food, biofuel, livestock, and non-food agricultural production, accounts for 78% of the area acquired (where the transactions involve at least 200 hectares, are referenced from more than one non-media source, and the commodity is known).  Other purposes such as carbon offsets, mineral extraction, and tourism comprise the remaining 22%. 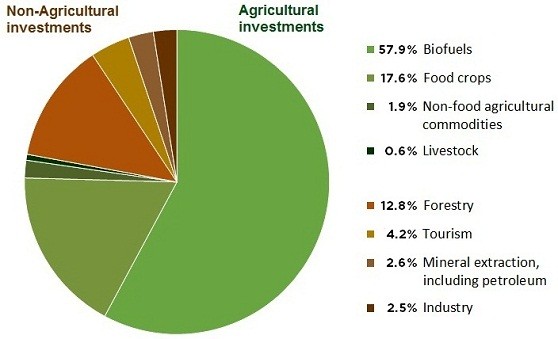 As the data above show, the greatest demand on the land by far is for biofuel production.  Furthermore, while food security concerns of investor countries are a major driver of the land rush, they are neither the only nor the most significant factor.

Because many of these investments have been made without regard to social, economic, and environmental impacts and without consultation with or consent of the affected land users, some have labeled the phenomenon “land grabbing.”

How much land is being acquired or leased under these transactions?

Estimates of the magnitude vary because many of these transactions occur behind closed doors and are not publicly disclosed.  Organizations rely on different methods of collecting and tabulating their data.  But even these varying numbers lead to the same conclusion:  the scale of this trend is enormous.

For instance, a 2011 report by the World Bank reported that data collected between October 2008 and August 2009 revealed deals covering 56.6 million hectares of land.  More recently, a January 2012 report by the International Land Coalition (ILC) indicates that, based on data from the Land Matrix project, large-scale land deals (those exceeding 200 hectares) reportedly approved or under negotiation from 2000 to November 2011 covered 203 million hectares of land.  This data indicates that the land rush is focused on Africa.  Of the 203 million hectares “reported,” approximately one-third, or 71 million hectares, represents transactions that are “cross-referenced” by more than one non-media source.  These numbers suggest that the precise scale of the land rush is difficult to determine.

What are some of the common misconceptions about these land transactions?

All stakeholders must understand the facts surrounding the global land rush in order to facilitate strategic investments that do not harm local communities.  However, misconceptions abound regarding this phenomenon and pose the danger of distorting policies for supporting socially responsible investments.  Articles and commentary on the land rush reveal six common myths:

What are some of the harmful practices that have been reported?

Recent research and media reports have revealed several troubling features related to the global land rush.  If these large-scale investments are to benefit all stakeholders, especially local communities, the practices outlined below must be corrected.

What are the risks posed by the land rush?

Large-scale investments involving land, particularly when carried out without good governance, can adversely affect poor and vulnerable populations and increase the risk to investors and governments.

These land deals can result in a loss of access and rights to land, water, and other natural resources and to the displacement of individuals and communities.  This in turn has a severely adverse impact on the livelihoods and food security of poor and vulnerable populations.  Displacement and reduced livelihood opportunities can lead to increased potential for conflict over scarcer resources.  Furthermore, these transactions can also cause environmental damage such as land degradation, depletion of water resources, and elimination of forests.

Because women are already generally more vulnerable than men in their access to and ownership of land and their ability to access any land compensation that might be awarded, the land rush can have particularly negative impacts on women’s land rights and related negative effects on social and gender relations.

Finally, these transactions pose risks to investors and governments:  they can create an anti-market backlash that has a negative impact on the investment climate.

What is needed to address the risks posed by the land rush?

Although the land rush presents many economic, social, and environmental risks, it also has the potential to provide benefits to local communities, investors, and governments.  By combining outside capital, technology, and market access with poor farmers’ land and labor, investment in the developing world’s land can improve rural livelihoods, advance broader development goals, and earn financial returns.

Such benefits cannot be realized, however, unless governments and investors take steps in the arena of land tenure policy and practice—in particular to address land governance shortcomings—to increase positive outcomes and reduce harm.  Moreover, the benefits may be better realized if investors partner with local communities by investing in smallholder farmers rather than acquiring their land.  This investment model can lead to substantial increases in productivity and in farmers’ standards of living.

There is promising movement among multilateral organizations, the private sector, and other joint public-private initiatives in the development of guidelines and principles for good land governance and for responsible investment in agriculture.  However, still missing are practical tools that can translate broad policies into actionable standards that will be implemented and honored by investors, developers, and governments and that can reduce the adverse impacts of these investments and protect the rights of vulnerable populations.

<< Back to Global Land Rush page