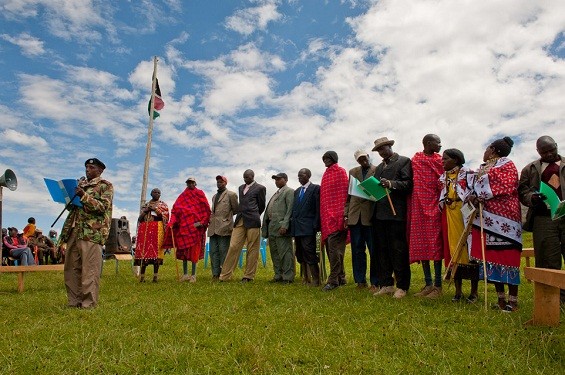 JUNE 12, 2012 — Dozens Maasai elders in the Kenyan highlands – who serve as symbols and enforcers of their community’s conservative cultural traditions — have vowed to uphold an entirely new tradition: equal rights for women and girls.

These elders, who normally act as guardians of age-old cultural practices and mediators in this remote area far from the nearest courthouse, unanimously wrote and adopted a new constitution to guide their own behavior last month. The document promises unprecedented protections for widows, orphans, women and girls.

The elders’ document pledges to ensure that women are educated to prepare them for their new roles in the community and that men should “agree/accept that these women can actually have meaningful contributions. We must begin to value women’s contributions.” 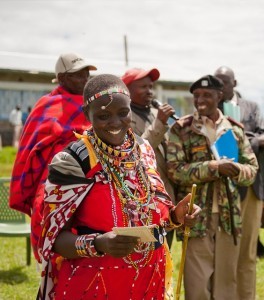 A Maasai woman reads the katiba after the announcement. | Photo by Deborah Espinosa

Moreover, the constitution calls on the elders to start this pro-women’s movement in their own homes by “recognizing our wives first by listening to them because that is the only way they will become bold and free …If we recognize them, they will not fear to speak out in meetings.”

The constitution, called a “katiba” in Massai, was an unexpected outcome of Landesa’s Justice Project. The USAID-funded project aims to make the ideals embodied in Kenya’s new national constitution (specifically equal land rights for women) real for women in rural Kenya. As part of the program, Landesa staff engaged the elders, women, and school children, in community conversations about the role of women.

The elders were initially hostile to ideas embodied in their nation’s new constitution (which was approved by Kenyan voters in 2010). But after a few weeks of earnest dialogue, they began to see the promise in allowing the women in their community equal rights. And eventually, the elders – on their own accord – determined that they should document their new thinking by drafting their own constitution on the issue. The document was debated in the community for weeks and adopted unanimously.

“At the beginning I thought Kenya’s new constitution was about how women would be ahead of or on top of men,” said David Sange, the Masai chief in Ol Posimoru. “But now I understand that equality is what it is. And we can talk about it without conflict. The law isn’t about one person being on top of the other. It is about equality.”

And this isn’t mere platitudes. The elders, understand that the words in their new document will change lives.

“As a chief, most of the issues I handle are family-based disagreements between a man and a woman,” continued Sange. “In the past it was difficult for me to rule in favor of the woman because of our culture and the difficulty in explaining to the man that women have a right. But now I am in better position to rule in favor of a woman. And I can articulate to the man in a way that he can understand and accept.”