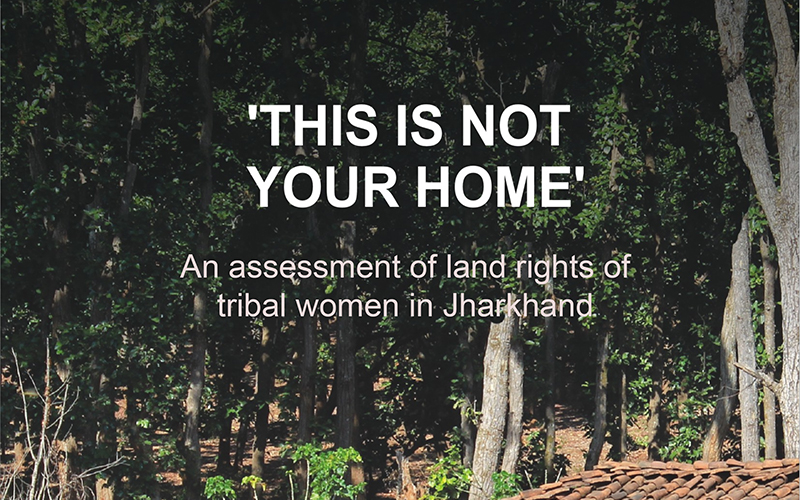 NEW DELHI—Researchers for a global land rights organization have published a grim assessment of the land and inheritance rights of women living in Scheduled Tribe communities of Jharkhand, India – and how the existing eco-system of laws and cultural practices perpetuate a system of terror and brutality meant to deny women of their land rights.

In “This is not your home: An assessment of land rights of tribal women in Jharkhand,” Landesa researchers reveal a brutal system of abuse and torture that deters tribal women from accessing their rights to land. The women in the tribal communities are particularly disadvantaged, as the customary practices do not support their land rights and the law of the state accepts customary practices of the tribal communities to be legal. While the research area focuses on the state of Jharkhand, similar trends are observable in India’s other tribal areas.

“India’s tribal land laws have categorically failed to protect the rights and interests of women in tribal communities,” said lead researcher Shipra Deo, Landesa’s Director of Women’s Land Rights, India. “Though intended to preserve cultural and religious practices of Scheduled Tribe communities, these laws instead fortify deeply entrenched gender discrimination, subjecting women in tribal communities to the basest assaults against their dignity, livelihoods, and even their lives.”

These tenurial laws, which seek to protect the interest of Scheduled Tribes and to regulate the transfer of tribal land to non-tribals, have failed to recognize women as independent and autonomous individuals, instead subsuming their interests to the arbitrary actions of men. Frequently, men who are “owners in waiting” of inherited land, view a single woman – whether a widow, sister, or mother – as a barrier to men’s full enjoyment of their rights. They perpetrate horrific acts of violence – sexual, physical, emotional, verbal, and financial – to drive women from the inherited land or property that they are waiting to own.

India’s tribal women are thus trapped between tribal practices that deny them their basic human rights and a legal system that leaves them with little recourse for justice. In a system where land ownership is the defining characteristic of one’s status in a community, women are again caught in between – an outsider in her marital home, and unwelcome in her birth home. As one woman said, “As girls grow up they keep hearing this is not your home, you will go one day to your [marital] own home. But when she gets married, she realizes that [marital home] is not hers either.”

Landesa is an international non-governmental organization that fights rural poverty and provides opportunity and security for women and men through the power of land rights. Insecure land rights are a leading factor in extreme poverty, food insecurity, gender inequality, conflict, environmental destruction, and sluggish economic growth. With offices in the China, India, Liberia, Myanmar, Tanzania, and the United States, Landesa has helped secure land rights for more than 500 million people living in 55 countries worldwide. Learn more at www.landesa.org.