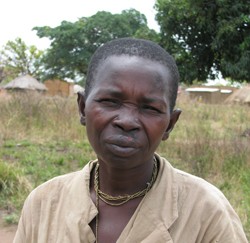 Grace’s story is one that touches on many of the most sensitive issues surrounding land access in Northern Uganda. She has been involved in a complex court case where the statutory (government)  system and the customary system intersect.

Grace was married when she was 19 and she and her husband had nine children. They moved to land provided by her husband’s clan and – apart from time spent in an IDP camp during the war – she’s lived there ever since. She lives on the land and she also uses it for farming. Her husband died in 2011.

The LCII is a parish level local council. The members are elected, and are often called on to help resolve land disputes and to organize local community level activities. When it comes to Grace’s dispute with her neighbors, she feels they have not offered her the help to which she is entitled. However, because she attempted to address the issues through this committee, Grace’s clan authorities feel that they are not able to help her resolve the issue either.

In her first encounter with the LCII, the council ruled in favor of Grace’s neighbors, even though the neighbors who were called to testify did not come to the hearing as requested:

Going to the Magistrate’s Court means that Grace was essentially starting her case again from scratch.

Since she does not have the money to pay the magistrate’s costs, though, there has been no progress. Grace’s clan leaders have also stayed on the sidelines, since the case was not brought to them in the first instance. And this is where Grace’s involvement in the project with WORUDET began, as the Community Based Facilitator for the project began arranging for mediation to take place:

Whatever the rights and wrongs of Grace’s case, ultimately for her the dispute over land is about how she will feed her family. With such complex legal and cultural forces at work, that’s sometimes easy to forget: