The name game: How women get erased in rural India 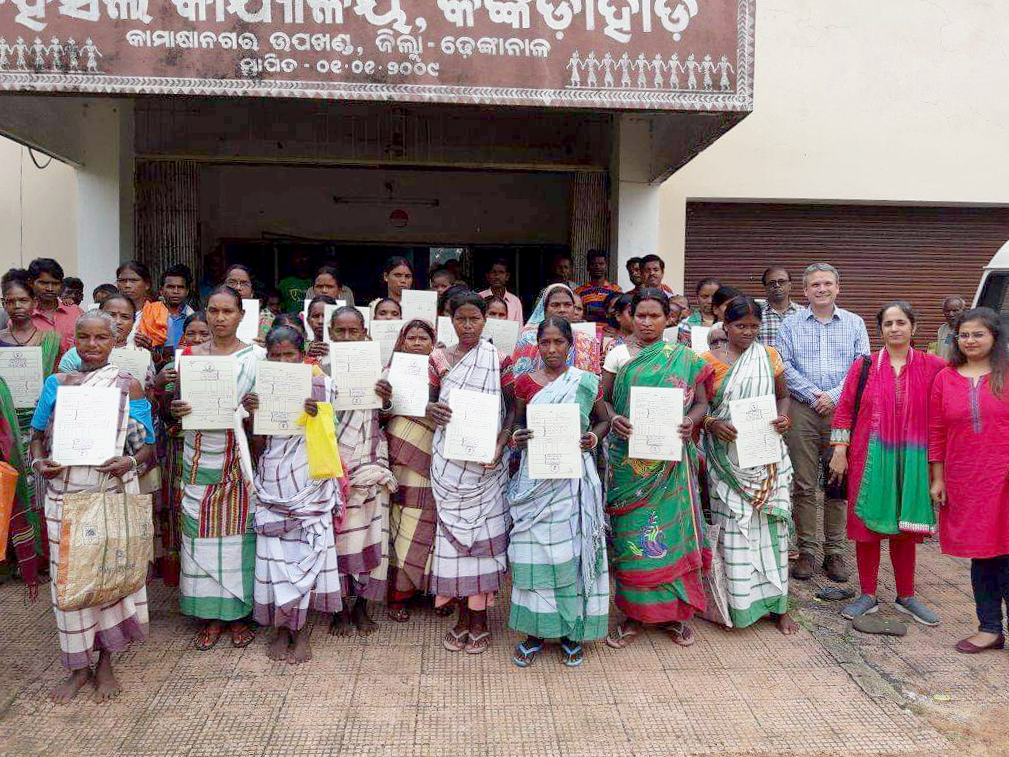 This op-ed was originally published by Thomson Reuters Foundation

On a bright sunny afternoon, about 100 tribal women and men gathered in an assembly hall in the Dhenkanal district in the state of Odisha, India. The women were dressed very nicely and were in festive spirits. After a long struggle, each woman was receiving title to a forest land plot in her own name under the Forest Rights Act. Their rights to land were finally secure, and could now be used to improve their lives.

When the land titling ceremony was over, a frail-looking elderly woman approached me and my colleague. She pointed to the title and asked: “Where is my name on this paper?” My colleague showed her. She smiled. “I wanted to see what it looks like.” She gazed at her name for a few more seconds. The spark in her eyes told me how proud she was to see her name, there, on a piece of paper.

In that moment, I remembered another elderly woman I met years ago in Shahjahanpur, in the state of Uttar Pradesh. As the women introduced themselves, she could not remember her name. She had come to the village as a daughter-in-law at the age of 12, and the villagers called her “Pappu ki dulhin” (the bride of Pappu). After she gave birth to a son, she was called Anil’s mother. I tried to help her recall what her parents or childhood friends would call her, but nothing helped her recollect her name.

Still today, it is common in rural India to refer to women as someone’s wife or someone’s mother. And they are referred to as mothers of their sons, never of their daughters.

In rural villages, one can easily find women who have their husband’s name tattooed on their wrist. However, even if her husband’s name is stitched on her flesh, most often a woman does not say his name aloud. Traditionally, a husband is a godly figure and saying his name is considered disrespectful.

But worse than stereotypes, women’s names can explicitly reflect that they are unwanted. In Uttar Pradesh, I meet a lot of girls and women named Antima (the last one), in West Bengal they are Iti (end), and in Rajasthan they are Aachuki (enough have come). It is believed that by giving a girl these names, the family will not have any more daughters.

Names can also serve as a talisman. A vibrant young woman that worked as a volunteer leader with my team in Rajasthan shared that her parents named her Suman, but her in-laws changed her named to Kusum and made her wear a locket with the new name. Her husband’s first wife (Kusum) had died just two months before their marriage. The family believed that by changing Suman’s name, the spirit of the first wife would not trouble her or the family. This protection required Suman to be erased.

Imagine with me: how does the sum of all these cultural dynamics rob women of their own independent identity? How do women and men think about women when customs dictate that women must be subsumed by the identities of the men around them?

A person’s name is the first label used to identify them at all levels of social organization. In a society that fails even to provide a woman with her own name, I can understand this government official’s sentiment: “What will a woman do with her own land? She has to live with a man anyway.”

Research shows that the act of naming a person goes far beyond identification by others. A name contributes strongly to a person’s self-concept—what comes to mind when one thinks of oneself, one’s theory of one’s personality, and what one believes is true of oneself.

On that sunny afternoon in Odisha, the spark in Sarojini Dehury’s eyes as she gazed proudly at her name on a land title is a testimony to the identity and assurance a name can grant to a person. I am glad our work at Landesa helps provide that depth of pride and security for rural women across the globe.

The old saying goes, “What is in a name?” There is so much. We need to recognize that names are also used to maintain the stronghold of patriarchy, and that is a complex game.