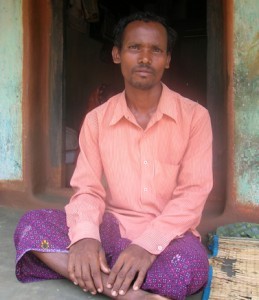 Around the globe, from the streets of London to the Arab world’s public squares, youth and disenfranchisement have proved a potent combination.  But Surendra Sabar, a 27-year-old occasional day laborer who was just one year ago without a job, without a place to call his own, and without any connection to the authorities in Odisha, India, is now a great supporter of his government.

“Before, the government never came to our hamlet,” Sabar said while sitting on the stoop of his mud brick hut. “We didn’t understand what is a government for. We just cast our wood (a reference to voting in India’s election system) and that was it.”

But a partnership between RDI-India and the state government of Odisha, gave Sabar a stake in the system and hope for the future by making him a landowner.

As landowners, Sabar and his neighbors qualify for government agricultural extension services. They’ve received a starter pack of six types of seeds and training in organic farming and they qualify for a host of other government anti-poverty programs: their children can attend government residential schools where they room and board for free and – even more importantly – become among the first of their village to read and write, and Sabar and his neighbors can receive a small grant under the government’s rural housing program to help them build a home on their new micro-plot that is about the size of a tennis court.

Across the developing world, land is often much more than just a place to grow food. Land ownership is often the entry point into becoming a full citizen. So when Landesa and its partners, including RDI-India, work to provide the poor with land rights, they are also working to ensure that these poor can participate in community decisions, send their children to school, access government agencies, and protect themselves and their property in a court of law.

“Before I had land, my future was dark,” said Sabar, whose family and neighbors have squatted on and tilled vacant government land for generations. They eked out a living on the margins, sharecropping for more established farmers in other villages or offering themselves as day laborers; their children joined their parents laboring in the fields of others after they completed primary education, as they were unable to continue to middle school without a permanent address or land title. Said Sabar, “I had no idea how I would survive in the future.”

But on July 21, 2010, government officers, as part of a program supported by RDI-India, gave Sabar and his wife title to a micro-plot of land. Previously owned by the government, the patch of ground is just a short walk from their current home. The pair quickly transformed their new plot into a lush garden full of okra, eggplant and a variety of green leafy vegetables. And they have put the power of their patta (the local name for a land title) to work, by calling on government services and support for their efforts, jointly seizing on this opportunity to carve out a more secure future for themselves.

“Now, I understand that the government’s job is to help the people. And they have helped us to build our future,” said Sabar, while sitting on the stoop of his mud and thatch home. “Now, I have land and hope.”