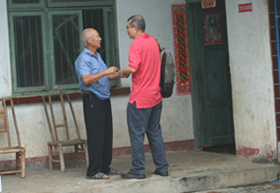 Li Ping and Xiaohui Wu, land tenure attorneys at Landesa, have conducted extensive  fieldwork to research the state of farmers land rights in Chengdu Municipality, the provincial capital of Sichuan Province. Sichuan Province is a key agricultural hub and is one of the most populous provinces in China with a population of 14 million.

Our findings were mixed. While many farmers reported receiving new land certificates that follow the proper template adopted by the Ministry of Agriculture in 2003, and many farmers had great awareness of their rights, problems remained.

Li and Wu found that farmers’ land tenure security come under serious threat due to frequent land readjustments (in which village leaders will confiscate and then redistribute all of the land in a village), illegal land takings, local policy in favor of scale farming and urban sprawl. Many farmers also complained about the fact that their legal rights had been violated and their voices ignored by local officials and village cadres in decision making processes relating to land takings and leases.