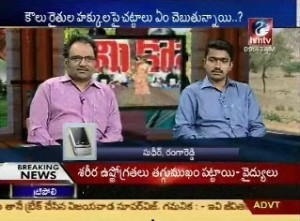 While the Indian state of Andhra Pradesh is famed for producing many of the stars who power technology firms from Bangalore to Silicon Valley, the state’s rural areas are still struggling to move forward in part because of insecure rights to land.  Roughly half of property owners in the state – that’s tens of millions of families – can’t make full use of their land because they have clouded ownership.

A television program launched earlier this year aims to address this problem.

Already 25 episodes have aired and the complete set of shows has just been released to the public.

The show is a 45-minute call-in program that features a five minute package researched by RDI, Landesa’s partner in India, that highlights a real person’s problem with land. Perhaps they lost their ownership documents, or perhaps their documents are incorrect or incomplete. Or, as is often the case, perhaps their ownership claims are not recorded in any public record. Whatever the problem, the RDI experts who appear on the show then explain how the situation can be resolved and take calls from people in the state who need advice on their own land problem.

Many of the callers are poor and illiterate people who can’t afford an attorney, don’t have the skills or knowledge to navigate the bureaucracy, or understand how they could possibly address their problem.

The program was launched by HMTV as a public service in partnership with RDI-India but has become an unexpected hit.

The first show, which airs in the local language of Telugu, attracted 25,000 viewers. Now, an estimated 60,000 viewers tune in every Sunday morning, which is considered prime time in the local TV market.

That a program offering basic legal advice to the poor would develop such a following is a reflection of how common land problems are in India and other developing countries. A study by the National Government of India last year found that conflict over land was so common that 12 percent of all murders in the country could be attributed to this cause. And an estimated 13 percent of GDP is lost each year due to conflicts over land.

“This TV show is not only for the poor,” said Prabhakar Rao, who works as a Land Manager in Andhra Pradesh. “It is also for local government officials to help them to understand the experiences of the rural poor and clarify any doubts about India’s very complex land laws.”

Indeed, local government officials have been among the shows callers.

“The poor don’t know their land rights,” Rao added. “They don’t know how to find out. But once they are educated about this and are able to correct their problem and get proper documentation, they can use these documents to apply for government benefits, subsidies, crop insurance, and more.”

This unexpected hit, started as a public service, said Tim Hanstad, President and CEO of Landesa, RDI-India’s partner. But, said Hanstad, “It has proved so popular, it now presents the station with a potential revenue stream. This shows the hunger and thirst there is for this information.”

“Land is the core issue in India,” said M. A. Vasu, a documentary film maker based in Andhra Pradesh who focuses on issues related to poverty and development.  “It is the core issue and source of conflict. And it has been this way from the beginning, even looking back into India mythology it was so and it continues until now. “

The released DVDs will be further edited and packaged as training material for local government officials.