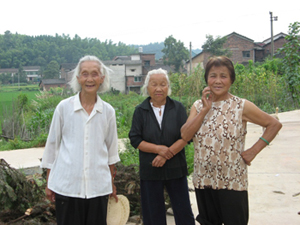 Landesa is conducting groundbreaking research on the impact of China’s forest land reform on rural women.  The forestland reform in China has been carried out for many years and aims at allocating forest land to individual households for 70-year use rights in an effort to encourage long-term investment in the land, which boosts income and environmental conservation. The research conducted by Landesa’s gender and land tenure specialist, Xiaobei Wang, and senior attorney, Elisa Scalise, is the first comprehensive analysis from a gender perspective on this reform.

Wang and Scalise conducted part of their research for this project in Heng Dong County of Hunan province in south China in July. They interviewed women about their forest land rights. As part of China’s forest land reform, each household was allocated shares of forestland by the collective based on the number of family members regardless of gender or age.

The primary challenge facing women who want to enjoy their rights to forestland is China’s marriage custom. Generally, women move to their husband’s village when they marry. This change in residence means many women can no longer manage their forest lands after they marry.

Landesa will continue to look into the unique obstacles and difficulties facing rural women in China through future fieldwork. We will explore what laws and policies are needed to safeguard rural women’s forest land rights after our fieldwork is conducted. Policy dialogue with the governments and women’s organization will also be conducted to ensure that this research produces positive results in terms of promoting gender equality and empowering women which will benefit entire families.

Landesa has completed the final round of this research and is drafting recommendations for interventions.