A sense of security for 35 families in India 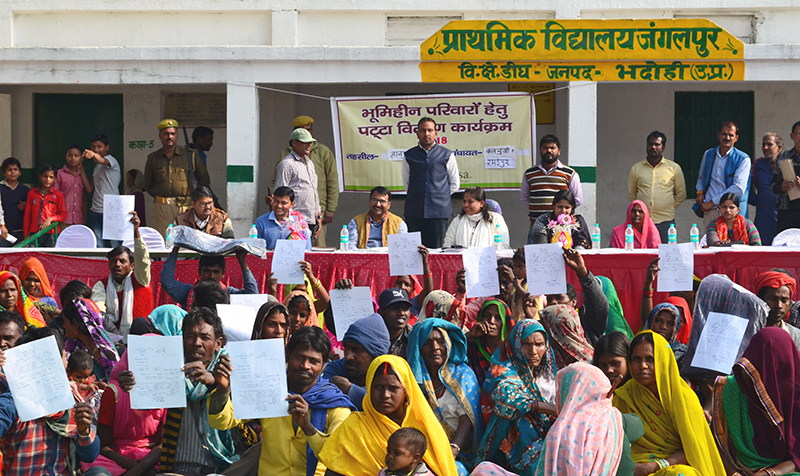 For 35 landless families in Bhadohi district in Uttar Pradesh, 2018 ended on a happy note as they received homestead land patta (titles) through a government land allocation. Previously without any rights to their land, these families lived in constant fear of eviction, and powerful members of their village often took advantage of their insecurity by forcing them to work in their fields for low wages.

But now with land titles in hand, these families finally have a sense of security. “Now, I have my own land. I can live peacefully without worrying about looking for another place,”said Vidya Devi, a single woman who received a land title.

“Earlier, we couldn’t benefit from housing services. Now, we are going to apply and get a pukka (permanent) house built on our land,” said Kiran Devi, who received a joint patta that lists both her and her husband’s names.

In the ceremony organized by the Gram Panchayat (village government) last December, Sub-Divisional Magistrate Ms. Amrita Singh distributed land patta certificates to 28 landless households in Kalanua and seven households in Ramaipur. Among these, 26 pattas were joint titled and five were in the names of single women. Along with the village head and members of local government, senior revenue officials also participated in the ceremony. Sanjeev Kumar Yadav, a deputy land revenue officer from Gyanpur, said that “with Landesa’s involvement, we were sure that the most deserving and eligible people were selected for land allocation. Since transparency was maintained from the beginning, not even a single conflict arose during the entire process.”