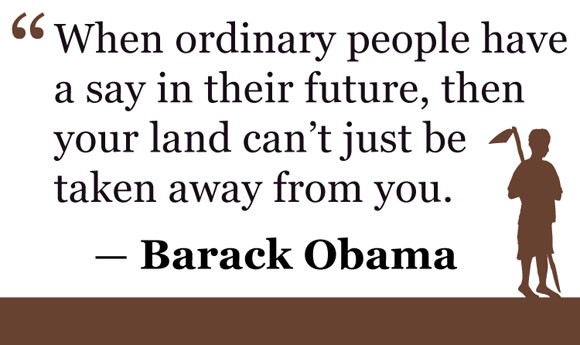 President Obama advocated for land reform during his historic visit to Myanmar in 2012, the first-ever visit by a U.S. President there. Using FDR’s “Four Freedoms” — the freedom of speech and expression, freedom of religion, freedom from want, and freedom from fear — as his framework, President Obama remarks were direct and unambiguous in his support for land reform for Myanmar’s rural women and men:

When ordinary people have a say in their own future, then your land can’t just be taken away from you. And that’s why reforms must ensure that the people of this nation can have that most fundamental of possessions — the right to own the title to the land on which you live and on which you work.