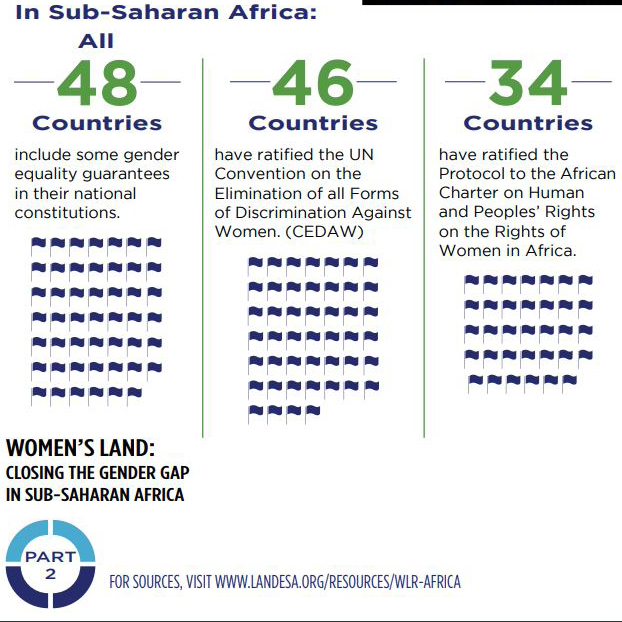 Download this Infographic (PDF) This infographic was developed from a variety of sources.

The percentage of employed women in agriculture in sub-Saharan Africa is from the International Labour Organization’s Women at Work 2016 report (Figure 13).
Statistics on land ownership and control in sub-Saharan Africa are from Gender Inequalities in Ownership and Control of Land in Africa: Myths versus Reality (Tables 4.2 and 4.3).
The percentage of African land under customary tenure is from LandMark.

Slide 3: The Gap in Governance

The composition of village councils in Tanzania is found in Tanzania’s Local Government Act, art. 56(c).
The percentage of women serving as chairpersons of District Land Boards in Uganda is from Gender and Economic Growth in Uganda (Table 1.2).
Analysis of women’s participation in Land Administration Committees in Ethiopia is found in FAO Gender and Land Rights Database – Ethiopia.

The African Union Land Policy Initiative’s Campaign for Women’s Land Ownership is described by the United Nations Economic Commission for Africa.
Read the Kilimanjaro Initiative’s Charter of Demands and announcement of the African Union’s endorsement.
Learn about the Landesa Center for Women’s Land Rights and the Visiting Professionals Program.
Learn more and sign on to support the Deliver for Good campaign.