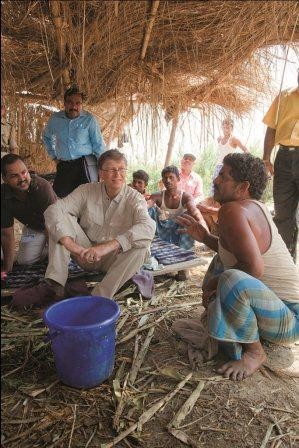 Landesa is pleased to post Bill Gates’s Annual Letter as a guest blog feature. The Bill & Melinda Gates Foundation is committed to accelerating progress for the world’s rural poor, and Landesa is proud to be a grantee for their agriculture investments in India.

My job is to learn about global health and development—and to travel to poor countries to meet farmers who can’t grow enough food, mothers who can’t keep children healthy, and heroes in the field who are doing something about those emergencies. Very few people can devote the time to really understand these complex problems. Even fewer can actually meet the people who are struggling to overcome them. That is why I write an annual letter every year.

I want people to know about the amazing progress we’ve made. I also want them to see how much more progress it will take before we live in a truly equitable world.

In this year’s letter, I focus on food and agriculture (though I also provide updates about all the global health and U.S. education work we do). When I was in high school, a popular book called The Population Bomb painted a nightmarish vision of mass starvation on a planet that has outgrown its carrying capacity. That prediction was wrong, in large part because researchers developed much more productive seeds and other tools that helped poor farmers in many parts of the world multiply their yields. As a result, the percentage of people in extreme poverty has been cut in half in my lifetime.  That’s the amazing progress part of the story, and not enough people know it.

But there’s the progress-yet-to-come part, and people need to know that, too. There are still more than 1 billion people who live in extreme poverty. They are located primarily in South Asia and sub-Saharan Africa, and they live on the edge of starvation. There is an irony in this, because most of them are farmers. We can help these 1 billion achieve self-sufficiency, just like we helped billions before them, but we stopped trying. At a certain point, the sense of crisis around food dissipated, and the proportion of foreign aid dedicated to agriculture dropped from one-fifth to less than one-twentieth.

My hope for my annual letter is that it helps people connect to the choice we all have to make. Relatively small investments changed the future for hundreds of millions of small farm families. The choice now is this: Do we continue those investments so that the 1 billion people who remain poor benefit? Or do we tolerate a world in which one in seven people is undernourished, stunted, and in danger of starving to death?

In times of tight budgets, we have to pick our priorities. It’s clear that in this particular time, we’re in danger of deciding that aid to the poorest is not one of them. I am confident, however, that if people understand what their aid has already accomplished—and its potential to accomplish so much more—they’ll insist on doing more, not less. That is why I wrote my letter. I hope you’ll take the time to read it and share it with your friends and family.

I’ve invited students from around the world to write their own annual letters too. You can send your letter, or any questions you have for me, to annualletter@gatesfoundation.org. I’ll be answering and talking about the ideas in your letters in a live webcast on February 2 on my Facebook page.