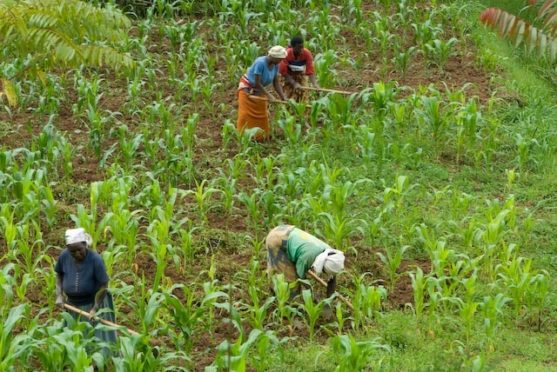 By Karina Kloos and Jen Duncan

The Gates Foundation shared its annual letter this week, thoughtfully responding to some “tough” questions the organization is often asked. One of those was on the topic of climate change, and why Gates does not give money towards fighting against it.

Melinda responded that in fact they do address and fund climate change efforts. Through the foundation’s agricultural portfolio, “we invest to help farmers be more productive, so that they’ll have more buffer to withstand lean years when they come. We also invest in climate-smart crops.” In doing so, the Gates Foundation aims to support those hardest hit by climate change: smallholder farmers throughout developing countries. These are the people who depend most on land for their livelihoods for food and income to sustain their families’ basic needs, and are therefore most vulnerable to the impacts of climate-induced droughts and other extreme weather patterns.

“Hundreds of millions of people in developing countries depend on farming for their livelihoods. They had almost nothing to do with causing climate change, but they will suffer the most from it.”

We could not agree more. At Landesa, we have been working with those smallholder farmers around the world for more than fifty years. Through our recent work on the ground we are witnessing those vulnerabilities among rural farmers as they try to cope with the changing climate.

Additionally, these same smallholder farmers, particularly women, often lack secure rights to their land. Underlying Melinda’s comment – and something the Gates Foundation has a history of supporting – is the important role of land rights in climate adaptation and resiliency. Without tenure security, the women, men and communities who increasingly depend on adaptation strategies for their survival may face additional obstacles.

Our programs throughout India, for example, have taught us that without secure tenure, households may not be recognized by governments and therefore miss out on opportunities to benefit from programs, potentially limiting the climate adaptation strategies available to them. Similarly, they might not have access to the financial services they need to make critical investments in their land and farming practices.

Most important, farmers’ tenure insecurity can be a major disincentive to investment in their land. A compelling body of evidence finds that households without secure land rights are less likely to make land-related investments. Studies have found this to be true specifically for soil conservation measures, one of many adaptation strategies. Tenure security is especially important in regard to women, who are often responsible for agricultural work but have limited say in how best to use and benefit from the land because they are not recognized as land owners.

In Northern Region, Ghana, for example, women in polygamous households rely on their husband’s discretion to access farmland: a husband may change, re-allocate or reduce the land given to any particular wife each year.  For these women farmers, tenure insecurity undermines incentives to make any long-term investment in their land, which they say has become increasingly depleted through diminished rain cycles and soil losses due to climate change. One group of women farmers illustrated precisely why they would not make efforts to augment their soil, though doing so would likely increase production for much-needed family sustenance crops. “Why would we buy a single bag of fertilizer for our land,” they said, “if doing so would only increase the chances that our husbands would take it back for themselves the next year?”

Our experience has shown that when women have security over their land, and the agricultural productivity and natural resources that come from it, they can make more confident, more informed choices based on the unique circumstances they confront, and knowledge they possess.​ This is true for men and communities as well.

We are again reminded that intervention efforts without protection for peoples’ land rights can be inhibiting and sometimes even self-defeating. The resiliency of the smallholder farmers hardest hit by climate change is fundamentally dependent upon their effective uptake and implementation of climate-smart agriculture and other adaptation strategies. Programs intended to support climate adaptation by the rural poor are likely to be more effective if their intended participants and beneficiaries are recognized as the rights holders to and decision-makers over their land.

During this time where global weather patterns are changing and the livelihoods and security of hundreds of millions of smallholder farmers hang in the balance, it is imperative that funders and civil society recognize this critical linkage between land rights and climate change adaptation.