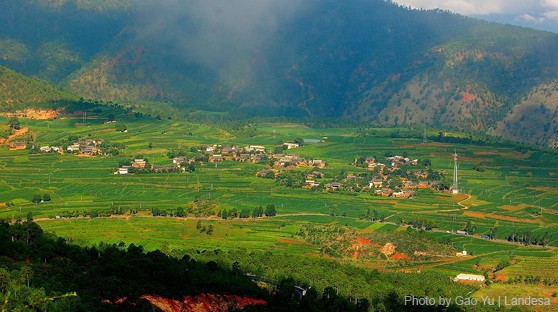 The most popular TV shows in China feature modern Chinese characters who travel back in time to the Qing Dynasty, roughly three hundred years ago. The Central Bureau of Radio, Film and Television of the Chinese government has taken issue with this phenomenon and recently issued a statement that “the producers and writers are treating the serious history in a frivolous way, which should by no means be encouraged.” The Central Agency followed up by issuing guidance to the film and television industry, that producers would be ill-advised to ignore.

Many people view this as the latest crackdown on dissent or free speech. But the bigger question for us here is, in a country where the authoritative government is so sensitive as to take offense to time traveling television characters, how can a relatively-small foreign NGO like Landesa promote changes in China and how has it managed to be so effective?

To find the answer we really have to go back in time. Landesa first started working in rural China in 1987. Since then, we have developed strong relationships with many senior officials of the government and well-known scholars who we have found to be very willing to listen to what we have to say. And what we have to say has everything to do with reality-based research and nothing to do with any political agenda.

As our time in China has grown, the government has come to see us as credible experts with genuine passion to help the rural poor, rather than a subversive American organization that might cause trouble. Today few international organizations working in China enjoy the strength of our relationship with the central government.

Much has been written about the Chinese concept of “guanxi” or “connections.” It is often the deciding factor in what gets done in China and it plays a key role in our work in the country.

Although legally all rural land is owned “collectively” or jointly by the members (i.e. farmers) of each village community, there is no meaningful way for farmers to exercise such rights. Under the top-to-bottom political structure, local and village officials typically answer to their superiors. Thus the central government is the dominating player and the final arbiter in this field. To ensure the long-term security of farmers’ land rights in China, the most effective way is to work with the central government for policy and legal reforms.

For example, China adopted a major rural land rights law in 2002. Landesa was a key advisor during the drafting process of the law, which for the first time specifically prohibited administrative redistribution of farmers’ land by village officials (“land readjustments”). It used to be a common practice as farmers were frequently forced to move their operations from one land parcel to another year to year, which prevented farmers from making any long-term investments in land according to our field research. Landesa was a strong advocate against land readjustments, and we leveraged our relationship with central agencies and senior officials to promote the desired change through various briefings, workshops, and other formal and informal exchanges. There was no lack of doubters and opposing forces at that time, and it was a delicate matter. But we strongly believed in our research findings and policy positions, and the government officials – in the end – did too.

Since then, land readjustments have been greatly reduced and we are now seeing signs of farmers making meaningful investments in land. Our latest nationwide survey shows that 24% of farmers have reported one of six specific types of mid to long-term investments in land (building orchards, green houses, pig farms, fish ponds, etc). In 2009 such investments yielded an average gross income for the investing farm family of nearly $2,800, and generated a total income of $60 billion.

There are a number of elements that could explain these investments. But our data analysis and field appraisals show that the gradual elimination of land readjustments has increased farmers’ confidence that they will have rights to their land long term, and consequently, led to a higher degree of investments. The adoption of the single legal provision in 2002 was the starting point, and Landesa was fortunate to be part of that positive change thanks to its uniquely effective way of working with its government partners in China.

This however is just one small step in the right direction. Provisional success, incremental progress, and occasional setbacks are the norm in China. As far as I know, none of the Landesa staff has yet to acquire the skill of time travel (which is good because otherwise he or she would not be able to work in China any more), but we are here for the long haul. I know for a fact that, if we keep plodding along, especially working in concert with our receptive and forward thinking Chinese government partners, we can make a difference for the hundreds of millions of Chinese farmers.