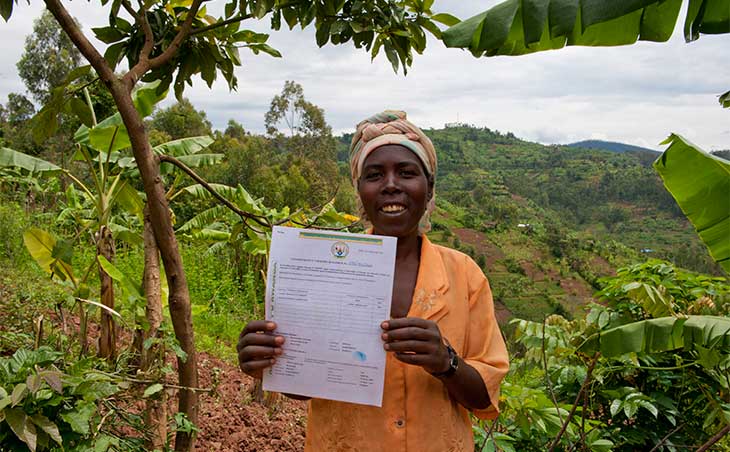 When we think about global development, we generally picture tangible improvements like bridges, hospitals, and schools. When it comes to agriculture, people think of improved seeds, fertilizer, and irrigation.

But just as much as they need fertilizers and seeds, farmers need secure land rights.

Renowned academics and authors like Douglass North, Joe Studwell, and Hernando de Soto agree that the intangible institution of land rights can spark true development breakthroughs. Yet we still struggle to convince people to see land rights as a fundamental tool for global development.

It is easy to overlook something that is complex, technical, and intangible. But we do so at our peril.

Too often land rights are incomplete, not legally recognized and protected, or fail to incorporate the interests of marginalized groups. The World Bank estimates, for example, that 90 percent of rural land in sub-Saharan Africa is undocumented.

But the problem of insecure land rights for the poor extends far beyond Africa. Landesa estimates that at least 250 million rural men and 400 million rural women around the world lack secure legal rights to land on which they depend for their livelihoods.

As is all too common, women fare the worst. Women’s access, ownership, or inheritance of land is impeded, by laws or practices, in more than half of the countries on the planet.

Developing the intangible systems of land rights is not easy. But it is possible. Where governments have invested in strengthening the land rights of the poor, rural communities thrive.

China is perhaps the best example in modern history. In China, the largest and most successful poverty alleviation program in history was built on the foundation of land rights reform that turned communes into family farms and eventually endowed those family farm households with 30-year, transferable rights to land. These ongoing rural land reforms in China have helped lift millions of Chinese out of poverty.

As the experience of China shows, broad-based and determined efforts to strengthen land rights for the poor can bolster entire economies. And when women share in those land rights, the impacts are even greater. When women have strong land rights, they earn more and save more, their children are healthier, and their families spend more on education.

Other government-led efforts demonstrate what is possible. Rwanda has led the way in Africa, embarking on a sweeping land rights reform. It began with key constitutional and legislative reforms and a gender-inclusive, nationwide land rights “titling” process in 2011-2013. The results include improved livelihoods, reduced conflict, and better agricultural management and growth.

State governments in India are also advancing progressive land rights reforms, including many aimed at women. From West Bengal’s micro-plot program to Women’s Support Centers in Odisha, India’s women farmers are accessing government support services and investing in their land to improve their harvests.

A great deal of scholarly research documents both the significance of strong land rights for the rural poor and the positive impact that women’s land rights have on family nutrition, educational attainment, and health. And yet it is difficult to raise awareness and understanding of these links.

Further, a land title or other documentation of legal rights to land is not an end in itself. It is often just the beginning—an intangible tool to help access other rights and benefits. To bring this intangible tool to life, and to show its impact on individuals and communities, Landesa has turned to storytelling through video. This is “data with soul.”

We worked with the Sundance Institute to create two films. Elders Speak: A New Dawn for Women in Kenya shows how Landesa’s Justice Project has helped tribal elders become strong advocates for women’s land rights as codified in the country’s 2010 Constitution.

Collisions, part of the Sundance Institute’s 2016 Stories of Change Initiative and supported by the Skoll Foundation, brought to life the story of a community of aboriginals in Australia who are struggling to protect their land.

These short films communicate the significance of land rights, and bring to life an intangible asset that empowers individuals and communities.

These films ask us to look beyond the obvious and tangible when addressing the most stubborn challenges of our time. For what good are seeds and fertilizers for farmers who lack secure rights to the land they cultivate?