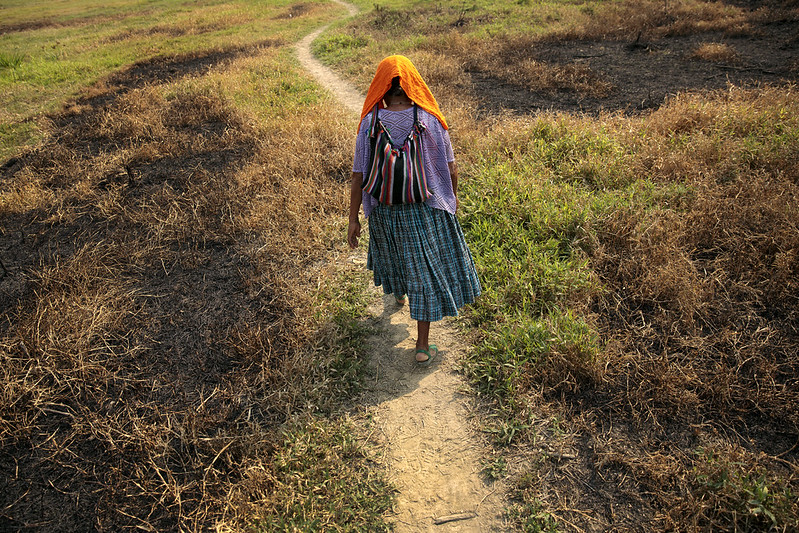 “Guatemala – Sepur Zarco case: The Guatemalan women who rose for justice in a war-torn nation” by UN Women (CC BY-NC-ND 2.0.)

This blog has been adapted from an interview published in Spanish by La Iniciativa Tierra y ODS. Lée en español

Diana Fletschner, a development economist with more than 15 years of experience in teaching, conducting research, designing programs and tools, and monitoring and evaluating interventions with a special focus on rural women, is leading the implementation of the SDG Momentum Group’s tool to facilitate reporting on the land-related SDG commitments.

The SDG Momentum Group aims to monitor the implementation of land-related goals: 1.4, 2.3, 5.a, and 15.3. It brings together civil society organizations, donors and UN agencies, which are actively working on the land-related SDGs to influence the Voluntary National Review process in the High-Level Political Forum of the SDGs and to promote accountable, holistic and transparent reporting on all land-related goals.

Initially, Diana warns that “six years after this global agreement, we are alarmed by how little has been accomplished on the land-related commitments. We knew it would take time, but we expected noticeable progress by now. The commitments are very altruistic, a great aspiration, but at this point most countries are not on track to fulfill them by 2030.”

“The inclusion in the SDGs of land rights for all and the explicit mention of women, indigenous peoples and other vulnerable groups, was a huge victory,” she explains. “It has increased the visibility of land rights, as it is now an issue central to all SDG discussions. However, it still competes with many other priorities governments have.”

Fletschner says, for example, that countries like Argentina have not nationalized their SDG land commitments. “They have not included a similar commitment in their national plans. Right from the start, the governments are not backing land rights as a political priority.”

Landesa’s website states that the majority of people experiencing poverty around the world share three characteristics: they live in rural areas, depend on agriculture and forests to survive, and don’t have legal control over the land on which they rely. Stronger land rights have the power to reduce poverty and conflict, increase economic activity, empower women, strengthen food security, and improve environmental stewardship for an individual, a family, a community, and an entire country.

“Addressing land rights challenges may seem difficult, and it often competes with other priorities, but secure land rights are the foundation that enables the realization of all the other SDGs. Thus it is upon us to avoid short term, temporary solutions, investing instead in interventions that can yield long-term sustainable solutions,” says Fletschner.

At the Iniciativa Tierra y ODS, we strive to increase commitments to the SDGs from all actors. In this sense, we agree with Diana’s emphasis on increasing the visibility of the SDGs at the local level. “For the SDGs to be an effective lever, regular people must know about this global agreement, the gist of the 17 goals, the progress that must be achieved by 2030, what the governments have committed to, and how they will monitor progress.” Only then, if this becomes something that everyone knows, understands, and demands, the government will have to make the “difficult decisions and appropriate investments to make the necessary progress towards these goals.”

Diana’s advice to civil society organizations: “make strategic choices about the issues you want to advocate for and the paths you recommend to address those issues; be consistent in your messages; use simple and clear language. The suggestions can evolve over time, but start with a few and ensure everybody is on the same page.

Grassroots organizations and the SDGs

Through the Iniciativa, we’ve noticed with great concern that many organizations do not believe they can have any influence on the SDGs. Contrary to this, Diana affirms that “grassroots organizations are in a privileged position in these conversations, because they are in direct contact with the communities and they are the ones that are best positioned to know what the problems are, the priorities of the communities, and what may be adequate solutions. They are also the ones that can monitor whether there is progress and if the changes are inclusive. ”

Though their role is clear, the question is whether these organizations have a voice in the conversations. “Nowadays that is easier, because COVID has made all the meetings that were previously face-to-face virtual. Organizations who have access to the Internet can participate much more easily, and can also use social media.”

In short, these organizations must “make noise about these commitments so everyone knows what the government has committed to. They have to strategically decide what they are going to praise, highlight, or ask for.”

Land in the SDGs

Diana expertly explains to us the SDG targets that explicitly mention land: 1.4, 2.3, and 5.a, which refer to land rights and SDG target 15.3 about land degradation.

“Target 1.4 highlights some groups but refers to all men and women, it’s a universal commitment. Target 2.3 is very similar, but focused on agricultural populations. Target 5.a refers to legal rights and policy changes that reduce or eliminate gender differences, so that women also have secure rights to land. This is an intermediate step to reach targets 1.4 and 2.3.

“The SDGs also include a commitment on land degradation in the realm of climate change. Target 15.3 seeks to restore or protect soils that have been or may be degraded.”

Countries committed to two types of reports. On an annual basis, countries are expected to report progress towards their commitments, using the indicators that were agreed upon. Also, every 3 to 5 years countries are expected to produce voluntary national reports. All this information is available on the SDG agenda website and can be used to hold governments accountable.

“In the case of land indicators, the truth is that the Argentine government and the vast majority of governments in the world have yet to collect these data in an official way. In practice, the SDG land indicators are not serving as a weapon to monitor progress, but rather as a mandate to generate this data.”

The voluntary national reports describe what countries have done. These are narrative reports that explain what is happening in the country, what actions have been taken, what progress has been made, and what plans are in place.

“These reports are very important because they include governments’ opinions on what they did and plan to do,” she explains.

The first thing that must be made clear is that the SDGs “are committed to leaving no one behind. The agenda is not only asking for progress but for progress that includes everyone and closes the gender gap.”

Diana suggests what the possible actions might be. For example, when we work on general land laws, we must also keep an eye on the laws that affect matrimonial rights, property, inheritance, etc. In addition, when seeking to improve administrative implementation or justice, it is not enough to have a capable team with adequate resources–it’s crucial to make sure that they have been sensitized and know how to work with marginalized groups and women. “They have to understand what these groups need, how to best reach them and how to make them feel comfortable, so that they can come to the offices to present their case and their requests, make the processes accessible, and so on. But the most important thing in this sensitization is that they see these groups as deserving of the rights and services. That they do not feel that it is a favor, but that it is part of the work they are doing on a daily basis.”

We also have to make sure that everyone knows their rights and how to claim and exercise them; that land documents include all relevant members of the household, not just the head of the household, which tends to be the man; that women in informal unions are not marginalized; and that women have equal access to mortgages, loans and agricultural extension services.”

In parallel, “it’s necessary to think about these changes, especially those that affect women, not solely as legal or governmental changes. In many cases it is necessary to work on changing attitudes in communities and in families, because many of the decisions that end up affecting or marginalizing women are decisions made within the family, where the cultural norms of the community and families are the ones that tend to discriminate.”

In summary, it is not enough to train and educate government employees, judges and those in charge of administering and resolving land issues. It is necessary to make communities and families also see women as agents who have rights to land and the possibility of using it, mortgaging it, renting it, selling it, buying it, giving it as an inheritance, in the same way that men can.

Currently, Latin America lacks official data on women’s land rights and tenure security to diagnose and track SDG targets 1.4, 2.3, 5.a, and 15.3. This data gap must be addressed.

“But even without nationally representative official data, one can see that women’s rights and tenure security varies by country and the community.”

Diana highlights that “compared to other regions of the world, the laws in Latin America are generally adequate and do not openly discriminate against women, but in practice there are still important differences. This can be seen by paying attention to who has documents that prove their land rights, who are the most frequent interlocutors, who has the access or economic power to fight for their rights and who the courts tend to favor.”

“Goal 5 is specifically about eliminating gender discrimination and empowering women, which is also visible across all of the other goals. All the land rights commitments mention men and women, and all the SDG land indicators are expected to be disaggregated by sex.

“Of course, we still need to put these commitments into action. It is up to us to fully exploit the SDGs to advance women’s and men’s land rights,” she concludes.