How to prioritize women’s rights in renewable energy push 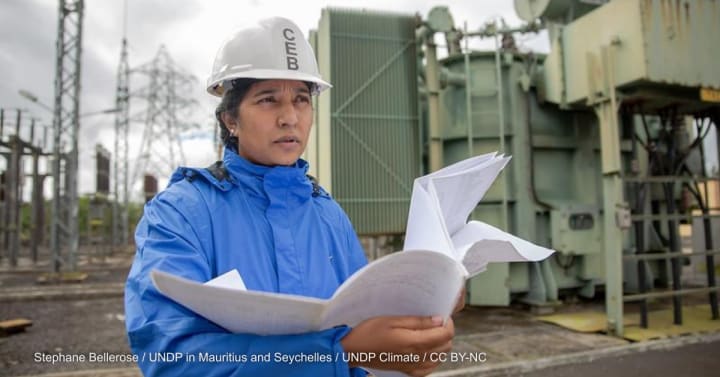 An engineer at a power station in Mauritius. Photo by: Stephane Bellerose / UNDP in Mauritius and Seychelles / UNDP Climate / CC BY-NC

This article was originally published by Devex.

The urgently needed shift from fossil fuels to renewables is clear and increasingly well known. The rise of renewable energy projects in response to this need has been exponential across most renewable sources and across many countries.

But this rapid and crucial shift has also witnessed a familiar trend: Women — especially rural and indigenous women — are severely marginalized in decisions about land use. Consultations and compensations are missing or disproportionately low for women in the context of investments in land, and women who defend human rights to land suffer disproportionate levels of violence. The rise of land use change for renewable energy projects is no exception.

During the food, fuel, and financial crisis over a decade ago, a portrait emerged of how social norms and a lack of gender knowledge among investors and funders drove land dispossession for women. The off-the-radar way in which this phenomenon continues in the context of renewables is also familiar: Turning a blind eye to rights violations finds tacit acceptance in service of progress and speed.

From village councils to parliaments, women are severely underrepresented among those making decisions about humanity’s most crucial resources.

In climate action funding, requesting “the business case” for integrating gender is still common; realizing women’s rights takes time and resources, and these allocations are often made with some reluctance, if at all.

While the primary and most horrifying costs of rights violations in renewable energy projects are to women themselves, and to their communities, the global cost is effectiveness. Women are essential agents for climate action; land rights enable their agency and decision-making ability. The fight for prioritizing their rights — to their land and to equitable participation in solving the climate emergency — is a fight for survival for all of us.

There is another, quieter fight: securing the representation and participation of women in all public spaces related to control of land and natural resources. This issue is tightly related to control over land due to a key link, and a difficult norm — for women, greater levels of asset control correlate with greater levels of political involvement. Still, globally, land is a male purview.

From village councils to parliaments, women are severely underrepresented among those making decisions about humanity’s most crucial resources. Hence, their perspectives and interests are often excluded when deals on renewable energy are being made.

How do we stop gender injustice in the push for renewable energy? Here are some ideas for key stakeholders:

Funders can support projects and organizations that take holistic approaches. Foundations and donor agencies often have siloed focus areas — e.g., one category for women’s empowerment and one for environmental or climate justice. Organizations at the intersection of these issues may see work go unfunded because gender-transformative proposals are viewed as too costly in the context of climate action, or women’s empowerment related to land isn’t seen as a climate action priority.

Funders can support effectiveness by supporting — or even better, requiring — a combination of gender and social inclusion with climate-aware or climate-focused programming.

Practitioners can elevate issues of land tenure and governance in climate action. There has already been much progress toward recognizing land as a key element in climate action; ensuring protection of rights; and participation of women requires sustained advocacy. Development actors can highlight and strengthen these links by developing pipelines for women to hold decision-making seats in government agencies related to land.

Global standards on land and human rights including free, prior, and informed consent and the Voluntary Guidance on the Governance of Tenure have been made applicable to enable private sector actors to ensure that they are not violating human rights while turning a profit. And investors in renewable projects can make “do no harm” mandatory, including gender and social inclusion integration.

The urgency of the climate crisis is undeniable. Prioritizing gender equality can accelerate efforts to arrest the crisis, and make sure approaches are both sustainable and equitable.