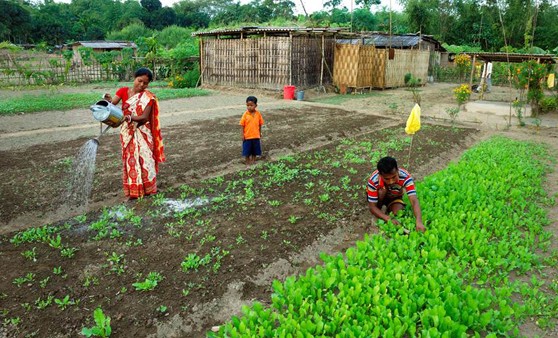 From the Philippines to South Africa, developing countries are pouring huge resources into providing housing for their poorest citizens.

This is a valiant effort and should be applauded.

But it can also be improved upon.

Using an innovation that is rather simple and affordable.

There is an extensive body of research that shows that providing the poor with not only housing but also a small plot of land surrounding their new home dramatically boosts the impact of such poverty alleviation programs.

Here’s how: by providing families with a home on a small plot of land, about the size of a tennis court, governments can provide not only the security of a home and bargaining leverage in labor markets, but also a place to grow vegetables and fruit, enhanced nutrition, a place to start a home business, and a place to store inventory or keep livestock. Landesa helped pioneer this micro-plot model.

Home garden plots also have the added benefit that they can provide women with significant control over household assets. Sale of micro-plot produce is often one of the only sources of independent income for women in the developing world. And it is often one of the few ways for them to ensure that their children’s nutritional needs are met.

The small plots of land necessary for such an improvement don’t require dramatic rethinking of current programs. And they don’t require so much land as to be physically or economically unfeasible.

India has had great success with its micro-plot program and thus far almost half a million families have benefited from programs in states from Odisha to West Bengal.

Studies have found this to be the case from South Africa to Russia and China to Bangladesh – small plots produce big returns.