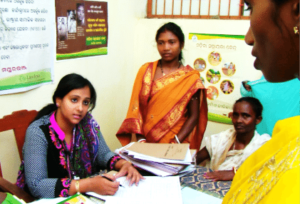 A version of this blog appeared on Zilient.

For Padma, almost all doors of hope were shut when her husband drove her out of their home. Her fault was that she gave birth to only girl children. Destitute and desperate, Padma lived in the cowshed of her brother’s house along with her two toddlers in a remote village, unsure of their next meal.

Padma lost more than her relationship and home; she lost her opportunity to earn a livelihood. Like the majority of women in rural India, Padma depends on agriculture for a living, and therefore on the land required to grow food and support her children. But because Padma was living in her brother’s household, she was “invisible” to the state’s micro-plot program. The land allocation program targeted landless households and granted land titles to household heads, typically the men.

Rural women typically have no livelihood opportunities outside of subsistence agriculture. They are often constrained by illiteracy, unpaid care work, and social attitudes that limit women’s roles; these factors and others often prevent them from pursuing formal work.

Like Padma, Gangi, a young widow from another village, was silenced by the fear of being thrown out of her in-laws’ home. Instead, she continued to be a victim of sexual abuse by her own brother-in-law, who discreetly tortured her within the four walls of the home. Because she was concealed in her in-laws’ home, she too was not counted for the state’s land allocation program.

For women who are single and at risk, this “blurred vision” of governance and “invisibility” result in exclusion and discrimination, preventing them from accessing land rights and the economic opportunities those rights provide. They are rural women like Padma and Gangi, who are separated, widowed or never married.

This is the case in Odisha, an eastern Indian state, where I work alongside the government and the rural communities towards achieving Landesa’s mission of securing land rights for the poorest people, with a special focus on women, who are disproportionately impacted by poverty relative to men.

I have learned that, despite progressive laws and policies at the national level, women in strongly patriarchal societies can end up being “obscured” by larger households, hiding their identities and existence. As a result, they are often effectively denied their rights to access land and other public entitlements.

Over the years, land programs have adjusted their guidelines to include women by ensuring that land titles included the names of wives, and by expanding their reach to include female-headed households. However, these programs still continue to bypass rural single women like Padma and Gangi, who live with relatives and are not recognized as household heads.

As a result, a land program intended to address the needs and reduce the vulnerability of the landless poor ends up excluding a highly vulnerable group. The example of these “invisible” women in Odisha demonstrates that even with good intentions — even when pragmatic steps have been taken to address gender disparities — benefitting the poorest of the poor requires careful analysis to determine where gender blindness still limits the effectiveness of a policy, law, or program.

To help “un-blur” the vision of land governance, we at Landesa worked with a proactive administrator of Ganjam district in Odisha to develop a new lens for revealing this typically invisible group. The Women Support Centre (WSC) program operates within land administration offices to identify landless single women and help them access their rights to land and other entitlements. Following a pilot in one sub-district, the program was scaled to seven districts with 88 WSCs. To date in the process, nearly 200,000 women have been identified in more than 7,500 villages in four districts. Of these women, 21 percent have been found to be eligible for land titles.

But the model is yet to reach all 30 districts of the state. Landesa is advocating with the state for a comprehensive land program for women, linking it to the broader goal of “women empowerment for inclusive growth and shared prosperity” with a focus on the land rights of single women as a “first step” in attaining it. Based on the current statistics, such a scaling could help the state reach an estimated two million single women who have remained invisible to its land allocation and entitlement programs.

Land is the most valuable asset in the developing world and a source of wealth, status, and opportunity; ownership of land is crucial for both the economic and social empowerment for these “invisible” women. As Sasmita, a formerly landless woman in Ganjam district affirms, “After I got the land in my name, I heard villagers calling me by my name for the first time.”

Pranati Das is a Communications Manager for Landesa based in Odisha, India.