Why land should be part of the post-2015 development agenda

This blog was originally posted on Devex as part of their Land Matters campaign.

Capable and hardworking women and men can be found throughout the world. Equal opportunity and rights to resources, however, cannot.

A high-level panel report delivered to United Nations Secretary-General Ban Ki-moon at the end of May maintains that we can change this. We can build a better world, “eradicating extreme poverty once and for all, in the context of sustainable development.”

So as world leaders wrap up a week of negotiations in New York that included a review of progress on the Millennium Development Goals and the release of an ”outcome document” to shape a new post-2015 development agenda, now is a good time to take a critical look at who remains stuck in generational poverty and examine the qualities they share.

Hundreds of millions of people around the world who remain stuck in abject poverty share four important traits: They live in rural areas, they rely on the land to survive, they don’t have secure legal rights to that land, and they are more often than not women.

Women like Kumra Makubai, an Indian farmer and mother of three. Like so many farmers around the world, Kumra had no control over the land she depended on to survive. Her children went hungry. They dropped out of school for lack of school fees. This short video shows how Kumra was able to begin her climb out of poverty with secure land rights.

Secure rights to land and other productive resources, particularly for women, are part of what the OECD Development Centre calls “the missing dimensions” of the MDGs – those fundamental, cross-cutting issues that currently are not adequately accounted for, but must be included to ensure a successful post-2015 agenda.

Today, there is a growing consensus recognizing the importance of secure rights to land and other productive resources – for women and men – to achieve broader development goals such as eradicating poverty and reducing gender inequality. In fact, secure land rights were mentioned in a number of key reports on the post-2015 agenda, and a report synthesizing 84 participatory studies concluded: “Priority should be given to ensuring basic needs relating to food, sanitation and land rights as without these, the poorest cannot access services such as education.”

In the past, secure land rights were often overlooked by the development community, in large part because they are an invisible infrastructure. They are a critical foundation for building peaceful and prosperous societies, but hard to see and a challenge to measure. When these rights are secure however, other development interventions can take root. Moreover, they are a gateway right: communities, families, men and women who enjoy them can use them to realize other broader and often more tangible rights and goals.

This missing infrastructure is at the root of so many of today’s deep-seated challenges, because a key to reducing poverty and addressing a host of other problems, from gender inequality to conservation to food security, is providing women and men with the security they need to make long-term plans and invest year-to-year, rather than survive day-to-day. Even a small plot of land can have outsized benefits, providing greater social status, autonomy, economic independence, and security. 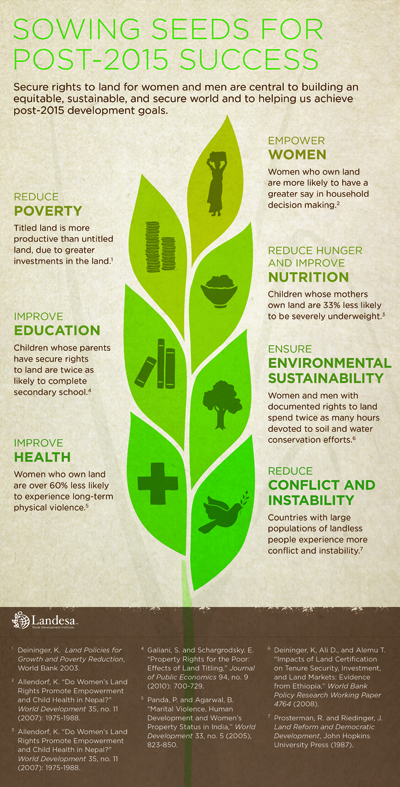 Take just one example: the village of Kabushinge, Rwanda. Until recently, farmers there had no way to prove that the land their families had farmed for generations was theirs. This left them extremely vulnerable as others could make claims on the land. They spent their meager resources, and a good chunk of their time, defending their land instead of investing in it. But once their land rights were secure, their incentives and planning horizons changed. They began investing in their land and using better inputs. Their harvests improved and with the extra money earned, they had more to spend on their children’s education and nutrition. Some opened or expanded home businesses.

Unfortunately, without a clear, actionable focus on securing the land rights of women and men, it has been more difficult for some countries to meet MDGs to reduce poverty and hunger, improve gender equality and environmental sustainability, and expand educational opportunity. The high-level panel is right: We can change this. Including targets in the post-2015 agenda focused on secure land rights for women and men will create a foundation for sustainable development.