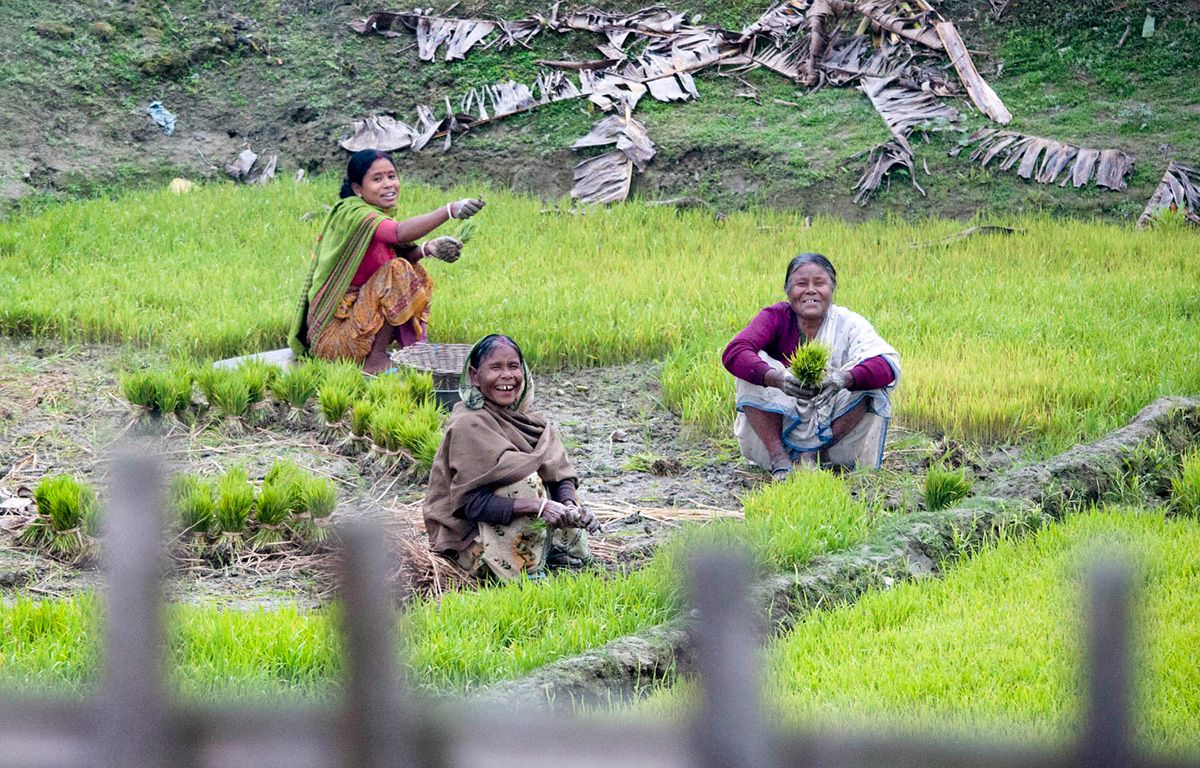 In my experience living and working on land rights, I have identified eight land-related topics that need to be prioritized and urgently addressed in India. These must be addressed no only by government at both the national and especially the state level, but also by civil society, researchers, and donors.

Topic #1 – Land for the Absolutely Landless.

Efforts to reduce poverty must include efforts to provide land to the landless.  This can be accomplished through allocation of existing unused or under-utilized government owned land, programs that assist landless persons or groups to purchase private land, and even land acquisition.  When the government uses the Land Acquisition Act to expropriate land for corporations, it can certainly consider doing so for the landless as well.

Solutions exist, including solutions that are already being used here in India.  Best practice from both international experience and experience here in India suggests that for the absolutely landless, house site land is relatively more important and desired by poor households than agricultural field plots.  So, if you can only do one, then focus on house sites – preferably house sites that are large enough to grow a large garden, keep some animals, and some livelihood activities on the house site.

Tens of millions of poor rural and urban households are long-time occupants and/or users of government-owned land, but don’t have formal legal rights to the land.  This includes land used for residential purposes, land used for agricultural cultivation, for non-timber forest products, and land used for other community purposes.  State governments, especially, and with the collaborative assistance of civil society need to more urgently focus on providing secure, formalized, legal rights to such poor, long-term occupants.  This notably includes more robust implementation of the Forest Rights Act, both for community and individual rights.  But it also includes revenue land.  Many if not most states already have legal provisions that allow for the regularization of long-time poor occupants on revenue land.

NGOs can help by identifying those poor households that meet eligibility requirements, helping them with the required paperwork, and then even assisting the government in processing that paperwork.  I know Landesa teams in numerous states are focused on these issues.  In Karnataka, for example, the team is working on the issue of regularizing poor, long-term occupants of Bagar Hukum, which involves more than 1 million rural households in that state.

Giving communities more formal rights and governance over community property resources is an important issue under this topic.  I know our friends at the Foundation for Ecological Security (FES)(link is external) and many other NGOs present are at the forefront of this work — working with communities across numerous states to help improve their rights and effective governance of common property resources – resources that are typically important for the livelihoods of the poorest households.

And informal occupation is not isolated to rural issues.  In an urbanizing India where, due to colonial legacies, urban land records are sorely lacking, urban land tenure insecurity is an extremely important issue.  Many urban residents are insecure and lacking legal documentation for their residences, as the PRIndex report clearly illustrates.

Formalizing and strengthening the rights of urban informal settlers is a critical step to building a middle class in India.

Although the situation certainly varies by state, the generally inadequate state of land records in India – both textual and spatial records – has a variety of negative impacts.  Inadequate land records are a significant source of land tenure security – certainly for the poor, but also much more broadly.  Inadequate land records also facilitate corruption, contribute to the high and costly incidence of land disputes, reduce the government’s ability to conduct effective planning and raise revenue, and generally limit the capacity for good land governance.

There is an urgent need to learn from recent experience within India and beyond in modernizing land information systems in order to develop viable and replicable models for improving and maintaining both textual and spatial records.

The process of computerizing textual records in various Indian states has pointed to several best practice principles, including the concurrent abolition of manual records, using the income generated to sustain and improve the system, and making the process transparent and results broadly accessible.

A particularly important best practice that has not been sufficiently implemented is to use a community-led, multi-sourced inventory process to correct the mistakes in the manual records before they are computerized.

Without such a community-led process, it is possible and even probable that more marginalized community members will lose out in the process of land records modernization at the expense of elites.

I cannot over-emphasize this point.  Landesa’s team in Telangana conducted a six-village pilot(link is external) that involved a community-led process to identify the gaps between the existing records and the understood rights at the ground level.  The pilot found that the vast majority of households – and virtually all poor households — had problems with their land records or documentation.  A cursory or desk review of the manual land records would not have uncovered these problems.  On the basis of this community-led process of comparing existing land records with data gathered directly from household surveys, review of land documents, and a field visit, the revenue department was able to strengthen the land rights of many poor households in the process of updating the land records.  Without the community-led inventory, many of those households could have had their land rights weakened or even taken away through a process of land records updating or computerization.

Second, concerning spatial data, it would seem desirable to focus public sector activity first on comprehensive coverage with a low-precision cadastral index map rather than establishing islands of high-quality spatial data in an ocean that remains largely uncharted.

Indian states are likely to be better off pursuing a more immediate goal of updating existing databases with the help of community-led processes, and functionally integrating the different databases used in land administration to provide landowners with a certificate that combines relevant and current information pertaining to a plot.

Farmland rental markets are a powerful tool for both increasing land access to landless and land-poor households and for more efficient use of land.  Unfortunately, the highly restrictive farmland rental restrictions in most Indian states have had a demonstrably negative impact on the poor’s access to land, on the tenure security of most tenants because of their informal status, and on overall agricultural efficiency.

The NITI Aayog’s Model Land Leasing Act provides useful guidance on how state-level laws with excessive restrictions or bans on farmland rental can be changed.  It is encouraging to see that a handful of states have recently made some legislative changes in the right direction.  Policy reforms on land leasing are needed in additional states, as these policy reforms have the potential to broaden land access to the land-poor, make tenants more productive through enhanced tenure security as well as improved access to credit and government services, put more land into productive use, and facilitate needed occupational mobility from agriculture.

Good land-related legislation is clear, consistent, and relatively simple.  The land legislation in most Indian states is anything but that.  Most states with which I am familiar have dozens if not scores of land-related laws, some going back two centuries, and with many provisions that are outdated, irrelevant, overly complicated, and/or inconsistent.  At least a couple of states have undertaken comprehensive processes to review that legislation, remove the outdated portions, simplify it, and harmonize it into a single, much more clear and simple land revenue code.  Uttar Pradesh is a good example.

More states could benefit from such a process.  Law is always better when it is clear and when it can be understood – both by those who must implement it and by those for whom it is meant to apply.

Whatever the state of land legislation, it is more effective when those who are governed by the law are familiar with its inherent rights and responsibilities.  Landesa has found in our work that poor households and particularly women have very low awareness of their land-related legal rights and how those might be exercised.  Enhancing knowledge in this respect is an important step to enhancing power – and it is much needed.

Also, particularly given the high incidence of land disputes in India and the limited access to legal services for the poor, NGOs, law colleges and universities, and legal service agencies could do much to fill in the gap.  The use of paralegals, in particular, in helping poor people resolve their land problems has enormous potential in India for large-scale impact.

Most of those working in the land sector across the world recognize that we face land-related data gaps.  I point here to two different categories of data, both of which require attention – both throughout the world as a whole and in India.

The first land data gap category is “impact evidence data”.  We need more research attention on what land-related interventions work and what interventions do not.  What interventions are having the desired impact and which are not?  We have learned a lot from past research, but there is so much more to learn.

The second data gap category is with “foundational data”  – that is sex-disaggregated data about who has land rights and the nature of those land rights.  Unfortunately, governments around the world are not routinely collecting this data, including here in India.

On this foundational data, we have a potential solution embedded in the Sustainable Development Goals, to which India has committed along with the community of nations. Land rights have been integrated into targets of three of the 17 SDGs – Goal 1 relating to poverty, Goal 2 relating to food security, and Goal 5 relating to gender equality.  Those land rights targets, however, will be largely meaningless unless the related SDG indicators gain prominence such that governments, including the Government of India, start systematically collecting the data.

There is still work to be done here to elevate the indicators, and advocate that governments, including the Government of India, collect the data reflected in the SDG land-related indicators so that we can better understand who has land rights, better diagnose problems, and more effectively monitor progress.

And we don’t have to just rely on the SDGs and governments for such new data.  The example of PRIndex shows that related and comprehensive data can be systematically gathered through non-government means.  And the India State of Land Report to be released later tonight provides an example of how existing data can be freshly presented and disseminated to help increase understanding.  Look for this report on the Land Portal Foundation, which by the way, is an excellent platform for providing land-related data and information.

These eight topics are not listed in order of priority.  In fact, women’s land rights is arguably the most important land-related topic for India.   It is a cross-thematic topic that relates to all of the earlier seven, but also goes beyond them.

Patriarchy is strong across the world and is especially strong in India, where it limits India’s economic and social progress.  Levels of women’s landownership in India are particularly low and levels of women’s land tenure insecurity are high.  Most women are dependent on men in their lives to access and use land.  The growing research we have on this indicates it is an enormous problem – not only for women, but for men, children, and the broader society.

And for we men – let’s not buy into the falsehood that empowering women disempowers men.  That is a lie.  We empower not only daughters, wives, sisters, mothers when we empower women.  We strengthen the broader community, nation, and world.  Gender equality is not a women’s issue – it is a societal issue.

And so much needs to be done and can be done to strengthen women’s land rights.