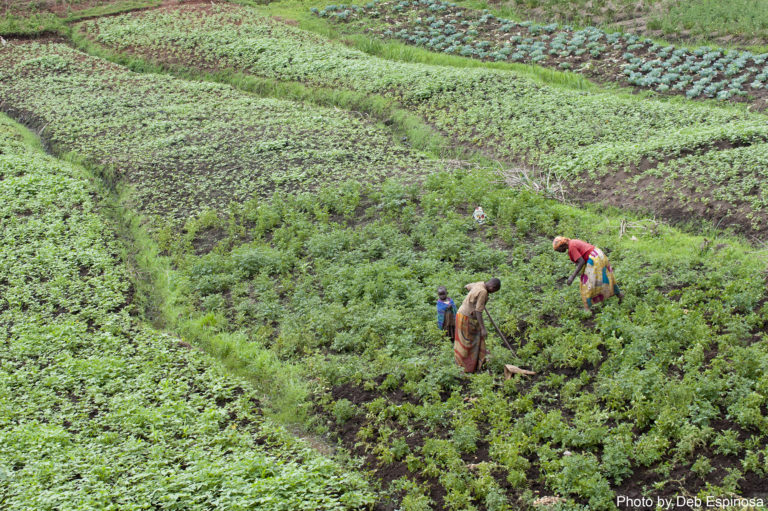 This transformative development acknowledges the need for better data on women’s land rights, and the need to empower women alongside men, to meet the 2030 Agenda challenge to “leave no one behind.”

So how do we bridge both the data gap and the gender equality gap when looking at land rights?

There has been increasing buzz recently about the power of “high tech” solutions, including mobile apps, drones, digital platforms, to radically improve information about land rights—and the ability to document and secure them. But high tech does not provide a silver bullet. These solutions are expensive, hard to scale and distribute. And given the gender gap in digital literacy, these high tech solutions may exclude women.

What’s most important—whether high tech solutions are involved or not—is participation, especially of women. Data collection on land rights will require coordination with local level actors in every country if it is to be done in an equitable, inclusive, and gender-responsive way. Achievement of the SDGs relies on information from the ground, where the discrimination and deprivation the global goals seek to address is felt. The need for participation indicates “low tech” solutions, like participatory mapping and social change strategies. The challenge is to fit technology to needs—to involve women in processes to secure rights to land (including getting technology into their hands) and to gather data to support these processes. For participatory mapping, this could mean training and empowering women to collect GPS data on the boundaries of their community and individual plots, and linking this information to SDG data. Social change strategies could involve creating access to SMS and basic mobile technology for both rural women and men, and ensuring that women benefit from training programs that use technology but too frequently follow gendered norms in distributing equipment and information only to men.

Exploration of a “low-tech” solution can be found in Ponte do Maduro, an informal settlement in Recife—home to some of Brazil’s most marginalized people. Espaço Feminista is aiding groups of women to use data to advocate and partner with policy makers to change and implement policies in line with land-related SDGs. Espaço Feminista began developing this model in 2011, recognizing women and communities as agents of change and sustainable development. They are now applying the model to strengthen women’s land rights: collecting data to monitor the SDGs and empowering grassroots women to use that data to lobby local, regional, and national government officials for changes in policies that hinder women’s rights to land, and for implementation of policies that favor them. They are building alliances with government and other stakeholders, and empowering women and communities in the process. Espaço Feminista plans to replicate this model within and outside Brazil to strengthen women’s land rights locally and globally, by identifying and sharing lessons and good practices.

Another example comes from GROOTS Kenya, a grassroots organization engaged in SDG implementation to promote gender equality and strengthen land rights. GROOTS has been active in closing the data and gender equality gaps, bringing government officials to local areas to understand land issues and build rapport with rural communities. For GROOTS, the SDGs’ inclusion of land was crucial. They were already collecting data on what impacts women most: land, agriculture, education, water, and health. The SDGs created new political will and provided a framework to reconstruct their tools, aligning with land-related indicators under SDGs 1 and 5. They are now digitizing data, and collecting individual-level data to include women and identify any perceived threats to women’s land tenure. They have seen huge gains; when they used data to inform government officials that women were walking 12 kilometers for water, the government set up water kiosks.

Civil society is uniquely placed to tackle the data gap and the gender gap.

Civil society can hold governments accountable to their SDG commitments through direct advocacy, and work with communities and government agencies at grassroots, regional, and national levels, affording women and men in communities the opportunity to be both collectors and reporters of data.

Groups like Espaço Feminista and GROOTS support governments’ and development partners’ need for increased capacity on the ground to gather data for and report on the SDG. Partnerships with civil society organizations can help governments extend their reach and build needed rapport with communities, and can help development partners design and implement effective programming.

The international community can close the data gap and take leaps toward gender equality by funneling support for SDG implementation to organizations like Espaço Feminista and GROOTS Kenya—groups that are already building rural movements, galvanizing support, and influencing governments. With sufficient resources, these organizations and others like them could bridge realities on the ground with national and international efforts, accelerating the creation of prosperity for everyone.