Keeping girls in school and reducing vulnerability to child marriage 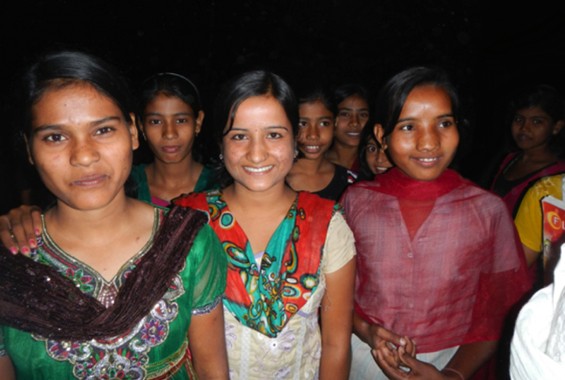 This post was originally published by the International Examiner on November 6, 2014.

In the last year, girls living in the village of Hatabul Kasaldanga Chandamari in rural West Bengal, India have learned three important numbers:

1098—the number for the government’s child line.

100—the number for the police.

18—the legal age of marriage.

The girls have memorized each of these with the understanding that they may have to use them sometime soon.

There is no crazed child abuser roaming the lush green countryside surrounding the village. It is something far more insidious that threatens girls in this quiet village: child marriage.

The average rural girl in India is married before she turns 17. Here in rural West Bengal, girls marry even earlier.

An innovative new program called the Girls Project, implemented through a partnership between the government of West Bengal, India and Landesa, a nonprofit that works to secure land rights for the world’s poorest, is helping to give rural girls tools they can use to help delay their marriage.

The program and others like it show that powerful, pervasive, and stubborn problems such as child marriage can be reduced with the help of the girls themselves.

There is good reason to press on this, not just for the benefit of these girls or this village, but for the future of India. Educated girls are more likely to educate their children, immunize their children, and be more able to support their families. According to the Global Campaign for Education, if India enrolled 1 percent more girls in secondary school, its GDP would rise by $5.5 billion.

But now they see themselves as active participants in determining their future.

Through the project, the girls have learned land-based livelihood skills. The small gardens they’re growing, some on the roof of their parent’s home, others in small patches of vacant land no bigger than a parking space, are helping the girls feed their families, earn extra money, and prove their value.

A study of the project has found that girls who participate are more likely to stay in school, marry later, and more likely to have an asset. More than 40,000 girls are participating in the project and the program is being expanded to reach more than 1 million girls over the next three years.

They are girls like Parul Mondak. The 18-year-old just graduated from high school and enrolled in a local community college. The timber trees she planted, prompted by the lessons she learned in the project, will be a financial windfall for her family when they are mature and can be harvested.

“We are learning to be independent,” said Parul. “We never considered this before.”

As former United Nations Secretary General Kofi Anan said, “Knowledge is power. Information is liberating. Education is the premise of progress, in every society, in every family.”

Based in Seattle, Landesa works to secure land rights for the world’s poorest people– those 2.47 billion* chiefly rural people who live on less than two dollars a day.  Landesa partners with developing country governments to design and implement laws, policies, and programs concerning land that provide opportunity, further economic growth, and promote social justice. To support Landesa and its projects, visithttps://www.landesa.org/get-involved/make-a-gift/.