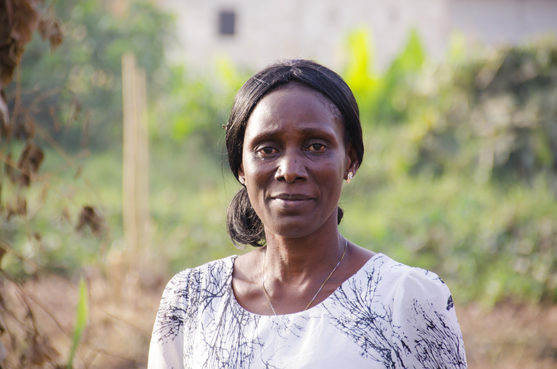 By Tyler Roush and Emmanuel Urey

In the fading afternoon light, Kou Berpa leads a small group out to a patch of land a short distance off of the main road in Ganta, Liberia.

The land is strewn with rocks and dried vegetation. The jagged remains of a tree stump consume one corner. It’s easy to miss the green shoots scattered across the grounds – the beginnings of a crop of corn that Kou has planted.

The land she’s working isn’t hers – Kou has made an arrangement with a local farmer to borrow his land to grow crops. When they mature for harvest, she’ll pay him “token” in the form of a share of the crops. Typical of land tenure arrangement in her community, she has no written agreement guaranteeing her access to the land, only his word that she can use it. She’s wary of improving the land out of fear that she’ll be evicted.

She’d rather grow rice, a more valuable cash crop. But that would mean clearing the land – an investment she isn’t willing to make.

“When the land is ready and he sees the place cleared out, he could tell me to leave the land because he wants to plant something here,” Kou says. “I’d be forced to leave because it’s not mine.”

Kou’s tenure insecurity undermines her economic potential and standing in her community. She, like so many others, is waiting for Liberia’s government to take action on land reform.

Kou’s experience is common. In most parts of Liberia, traditional land tenure systems often exclude women. “I want the government to enforce our rights to decision-making (on land). When it comes to land business, I want women to be able to hold a portion of land as their own property,” she says.

Liberia has yet to enact a comprehensive land law, leaving the land rights of millions of Liberians uncertain. Women like Kou, because of patriarchal customs relating to land, inheritance, and marriage, are particularly at risk.

Debate over Liberia’s Land Rights Bill, which would provide a legal framework to implement recommendations from the state’s Land Rights Policy, has been ongoing since 2013. A version of the bill passed Liberia’s House of Representatives in 2017, but members of Liberian Civil Society have raised concerns that the House bill doesn’t do enough to protect rural land rights, particularly in customary settings.

To encourage conversation and debate over the Land Rights Bill, the Land Portal Foundation, the Sustainable Development Institute(link is external) (SDI) and Landesa are co-facilitating an online discussion with the goal of contributing knowledge and expertise to the ongoing land reform process and support the passage of a version of the Land Rights Bill that safeguards the land rights of all Liberians. Other partners in the discussion include Rights & Rice Foundation, Habitat for Humanity International, Oxfam, and the Land Rights Now(link is external) campaign.

The discussion, to be held July 18 – Aug. 20 on Land Portal, will convene members of government, civil society, development professionals and other experts to consider the following questions:

1. Recognition of Customary Land Rights for All: What do you think about the entitlement of one acre in fee simple (deeded land in customary residential areas) for each member of a community? Should customary land be sold?

4. Protected Areas: How should the government reconcile the issue of customary land rights in protected areas?

5. Existing Concessions and other land grants:  With a large land area in the country (mostly customary land) already granted through concessions, what should be the role of communities in the renegotiation of concessions?

Liberia has the opportunity to promote the social and economic empowerment of millions by embracing pro-poor and gender-equitable land reform. How the country approaches the adoption and implementation of the Land Rights Bill is critically important. Join the Land Portal and add your voice to the conversation.