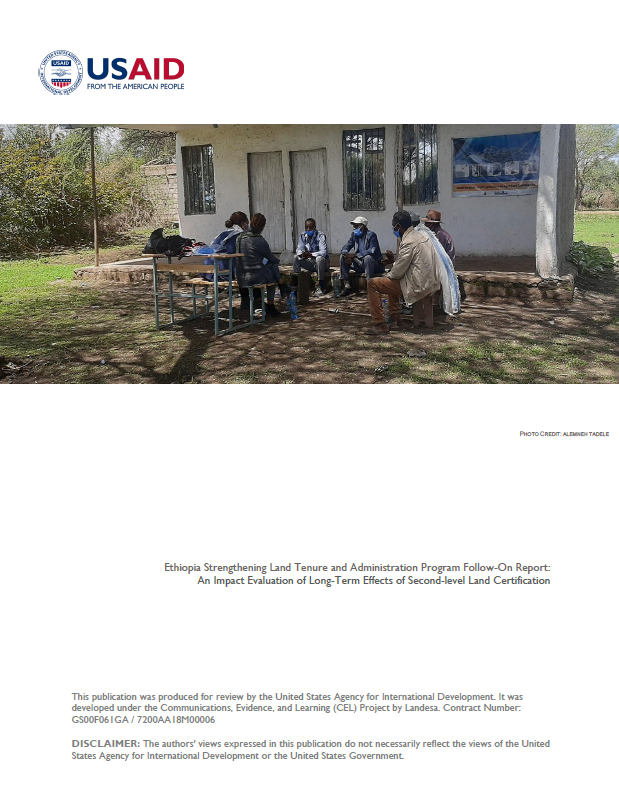 This report presents findings from an evaluation of long-term impacts of the highly innovative and cost-effective Ethiopian land certification program that took place between 2005 and 2020. We assess certification’s impacts on tenure security, agricultural investment, leveraging land for credit or rental, and women’s empowerment for up to 17 years for any land certification and up to 14 years for second-level certification. The evaluation adds to the evidence base on land tenure’s roles in rural development and can inform the design of registration and other land programming to improve the well-being of rural land users in Ethiopia. Specifically, it contributes to an evidence gap on long-term effects of land programming, which is especially important for outcomes such as large agricultural investments or women’s empowerment which are theorized to take more time to occur. This evaluation also enables greater visibility into the timing of when effects occurred, their duration, and their size at different points in time.

In 1998, the Government of Ethiopia (GoE) embarked on a rural land registration program to certify the long-term use rights of rural households in the four rural highlands regions – Tigray, Amhara, Oromia, and the SNNP. The certification effort was partially motivated by an intention to increase tenure security after a history of land reallocations. This effort, now referred to as “first-level certification,” provided households with certificates of use rights.

This evaluation’s overarching research questions are:

Q1) What are the long-term effects of receiving land certification on well-being and economic outcomes for households? How do these differ by household characteristics such as gender of the household head, poverty status, or region?

Q3) What are the effects of receiving land certification on wives’ land ownership and decision-making about land in dual/male-headed households in rural Ethiopia?

Q4) What are the effects of receiving land certification on the risk of women experiencing intimate partner violence (IPV) in male-headed households in rural Ethiopia? If so, why?

Q5) Are women who have certificates in their names better able to solve land-related conflicts? What are the main barriers preventing women from accessing justice when they experience a land conflict?