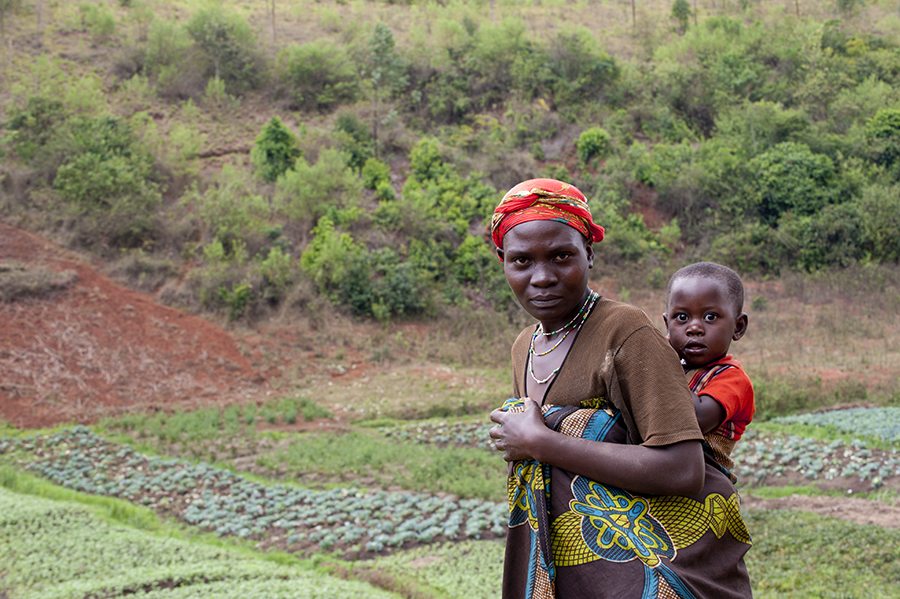 I was twelve years old when I first saw a woman forced out of her house with her two children, guilty only of being recently widowed. Her in-laws said she did not contribute anything to the estate of her husband; others accused her of killing him.

Plagued by these accusations, she left her home and struggled to make a living. She did not file any legal action in court. Since then, I have heard and read countless cases like this, and assisted a number of women as a pro bono lawyer focused on women’s land rights in Tanzania.

This situation is not unique to Tanzania. Though millions of African women rely on land for their lives and livelihood, far fewer women than men enjoy secure rights to it. As a new infographic by Landesa and the Deliver for Good campaign explains, the reasons for this include discriminatory customary practices, marginalization in land governance, and gaps between national and regional policies that aspire to gender equality and the implementation of laws at the local level.

Although Tanzania, like many other countries in sub-Saharan Africa, recognizes equal rights and non-discriminatory provisions in its Constitution, in practice and in some laws, women have not been accorded the same rights as men. On the positive side, Tanzania’s Land Act recognizes the right of every woman to acquire, hold, use and deal with land to the same extent and subject to the same restrictions as the right of any man. Similarly, it includes provisions that customary laws that deny women lawful access to ownership, occupation or use of land are to be held as void.

When it comes to inheritance rights, however, women continue to experience discrimination in both law and practice. According to Tanzania’s National Land Policy, inheritance of clan or family land is to be governed by custom, provided it is not contrary to the Constitution and principles of natural justice. In reality, the customary laws — even the codified ones — are based on patriarchal notions and do not favor women’s inheritance of land.

Tanzania’s 2014 Constitution, which awaits referendum, recognizes equal rights for men and women to acquire, own, use and deal with land. However, it does not explicitly provide women the right to inherit land and does not guarantee reform of discriminatory customary laws.

Women’s inheritance is also a thorny issue elsewhere in Africa. Both Kenya and Uganda have very progressive Constitutions in terms of land rights, which were followed by land law reforms. However, inheritance of family land has been excluded from the land reform agenda in Uganda, even after the UN Committee on the Elimination of All Forms of Discrimination Against Women (CEDAW) took up the issue of discriminatory inheritance laws in its guidance to the government in both 2002 and 2010. Kenya has yet to reform discriminatory aspects on women’s inheritance rights in its Law of Succession Act of 1972, which would be necessary to ensure that principles of gender equality run consistently through all legislation concerning family land matters.

Despite adopting a new Constitution in 2005, Burundi has no legislation prohibiting discriminatory inheritance practices.

In the whole of East Africa, Rwanda is an exception—both its Constitution and accompanying legislation safeguard women’s rights to inherit land. However, more need to be done for these good laws to translate into equal inheritance rights in practice.

Is there hope ahead?

Africa is witnessing a second wave of land reforms following the reforms of the 1990s. Land reforms have recently taken place or are underway in Malawi, Kenya, Liberia, Ghana, and Tanzania. These reforms are happening at a time when the African Union has already adopted a Declaration on Land Issues and a Framework and Guidelines on Land Policy. These tools provide direction on ways to improve legislation governing land and inheritance issues across Africa.

At the same time, there is a growing movement of women’s land rights advocates at the grassroots level. In October of 2016, rural women across the continent met at the foot of Mount Kilimanjaro with a charter of demands addressing women’s access to use, control, own, and inherit land and natural resources. In a landmark victory for women in Africa, the African Union endorsed the Pan African Women’s Charter on Land in April 2017.

To facilitate collaboration on women’s land rights issues throughout the region, the Landesa Center for Women’s Land Rights is building a network of experts through its Visiting Professionals Program. By gathering expertise from across various land governance and land tenure systems within Africa, professionals can leverage their impact to transform gains at the policy level into implementation on the ground.

With growing coordination at the grassroots level, women’s land rights experts can ensure that commitments made at the regional level – including implementation of the UN Sustainable Development Goals and fulfillment of the Land Policy Initiative’s 30% Campaign for Women’s Land Ownership – are administered effectively locally.