Property and land rights are key to women’s empowerment 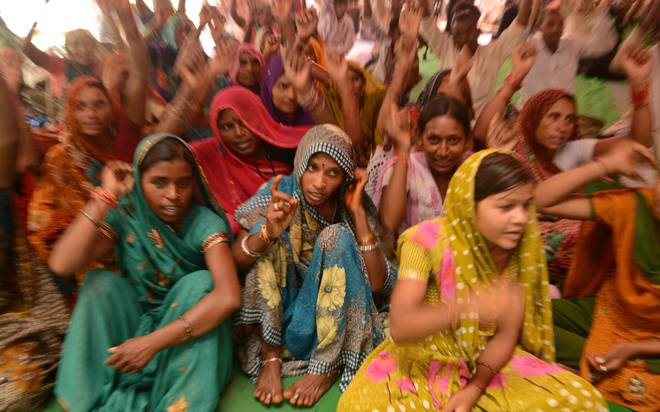 This blog originally appeared on The Hindu.

On a hot afternoon, Anju, 16, eldest of six sisters, sat on a Chorpoy (a woven light bedstead) a few steps away from me in a room in her house. The door was closed to block the bright sunlight or, perhaps, to muffle the sounds of our conversation. We were talking about Anju’s family and the land.

As tears rolled down, the room filled with her soft wails.

“They all did a panchayat [an assembly of village leaders] immediately after my father’s death, and decided that my mother should adopt the younger son of my uncle, and will her share to the adopted son.”

“My mother could not say a word. They all were elder and powerful men of the family and community. Despite being educated and aware about my rights, I could not resist this injustice.” A sense of helplessness was obvious on her face.

Anju tried to convince her mother to raise a voice but her mother was silent, scared, unsure, unable to do anything. Her mother didn’t think that she and her daughters in the family had the ability to manage 15 bigha (around 4 acres) of land. Without a man in the family, she thought, it would be difficult to marry off the daughters. It has been 107 years of celebrating International Women’s Day, 67 years since the adoption of the Indian constitution guaranteeing equal rights to men and women, 37 years since the ratification of the Convention on the Elimination of all forms of Discrimination Against Women (CEDAW) and 12 years since the amendment to the Hindu Succession Act that gives daughters an equal right to inherit property. Despite these strides, the lives of women like Anju continue to be governed by the age-old practices and norms that only ensure that women live a life of inequality, discrimination, injustice and exclusion.

Ownership of land plays an important role in strengthening women’s agency and giving them opportunities to assert themselves. There is ample evidence that women’s land rights lead to positive outcomes for the well-being of them and their families.

Since land is a valuable and critical resource, the resistance towards women’s land ownership rights is equally strong in the patriarchal system that governs Indian society. The institutions responsible for making laws, and the people that implement them, are themselves deeply conditioned with the customs, practices and beliefs that create barriers for women to own land, both in India and in more than half the countries across the world.

Despite the Hindu Succession Amendment Act of 2005 explicitly ensuring equal inheritance rights for women, laws in several States do not necessarily follow the same spirit. Anju’s home State of Uttar Pradesh is a classic example.

In a so-called progressive move, the recent amendment in land laws in Uttar Pradesh elevated an unmarried daughter to be an equal heir with her brother to the family property. A married daughter, however, cannot inherit family land. When one looks at this reform deeply, it doesn’t appear so progressive. The fact that the inheritance is dependent on the marital status, in effect, poses huge threats to the condition of unmarried girls even further. By all probability, the brothers in the family would now want their sisters to be married off earlier, to stop them from claiming their rights.

I shared this concern with a senior bureaucrat in Uttar Pradesh and he exclaimed that this thought didn’t cross the minds of the law reform team. The general notion is that a married woman will claim her share in her husband’s property, and therefore does not need land in her parents’ property.

At best, it is just an illusion — the fact remains that all the forces around conspire together so that land doesn’t go to women.

When I asked a group of young girls and boys what they feel about the reform in Uttar Pradesh, they all thought it was good, because now the brother could sell off the sister’s share to get her married.

That is the way both women and men are conditioned to think. The norms and practices that we grow up living with make us believe that women are lesser humans, that their interests are subsumed by the interests of the men of the family.

In eastern Uttar Pradesh, Naagpanchami (a festival of Hindus celebrated across India) is accompanied by the practice of beating dolls (also called locally as gudiya patakka). Little girls make beautiful dolls of cloth, and their brothers are supposed to beat these dolls to strands with a stick and drown them in water.

There are various tales about this practice, but the common one is that the sons of a famous king beat their sister to death when she eloped with a person of her choice. Thus, the festival is a reminder to girls to honour and live within the norms and social practices and understand their place well.

Another social practice takes place before the wedding night, when the bride-to-be is made to sit on a low-lying platform and the groom on a higher one to take bath. The water used to wash the husband’s body flows down to the body of the wife, and this is how she learns to accept the good and bad of the husband as an obedient wife.

There is a horde of such practices. We live our lives as ambassadors of culture and norms and consider them as given.

If women’s empowerment and equality in general, and their ownership of land and assets in particular, is to be achieved, legal reforms alone are not sufficient. Making conscious efforts to challenge the cultural norms and making institutions an equal partner in the same is equally important.

Only then will women like Anju be able to assert their rights to land and other resources.