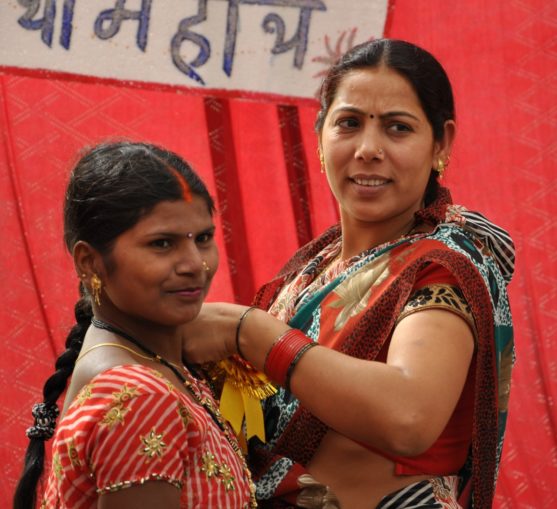 On the U.N.’s International Day of Rural Women, Shipra Deo of land rights organization Landesa looks at two women who embody the tenacious spirit found in India’s rural communities and explains how overturning gender inequality is central to achieving the SDGs.

“There are a number of stories that are written on women’s bodies and minds.”
– Amrita Pritam

As I have worked with and listened to women in India’s rural communities, I have learned that resistance by women is as old as suppression itself. By confronting traditions and social norms that too often deny them their rights to land and other social and economic opportunities, rural women show courage in countless forms and in innumerable ways. On the International Day of Rural Women, I wish to celebrate two women who embody this culture of courage for the advancement of women’s equality.

In a village in the Shahjahanpur district of Uttar Pradesh, India, I met a woman named Devki Bua, then 75 years old. She had been asked to leave a women’s discussion group by my colleague, who had mistaken her for a man because of the way she was dressed. We learned she began to dress this way in her early 20s. Her husband had passed away, leaving her with a daughter aged just one year old. The family had no land, and she was forced to work as an agricultural laborer. She found that her dress, the saree draped around her body, was obstructing her work and at the same time attracting unwanted attention. She threw away her saree, donned the clothes of her late husband, and had her hair cut short. She hasn’t worn a saree since.

“The day women realize that they are complete in themselves and don’t need to depend on a man for their lives, they will move ahead,” she said. “Once a woman decides to move on, nothing can stop her, but we women overlook our own strength.”

I met Sudevi in Pratapgarh, Uttar Pradesh, when she was a young widow of 24. She could never forget the ordeal that came with becoming a widow. She bitterly remembers the way the women in the family and community stripped her of all the adornments that marked her as a married woman: They took her jewelry, broke her bangles and decolored her forehead by removing the bindi and sindoor, the colorful pigments traditionally worn by Hindu women. They would say she became a widow because of her bad “karma” in the past life. It took her more than a year of mourning and silence to realize the same society that had taken her dignity and labeled her as unfit for anything productive would not help her support herself.

She joined a women’s collective and in discussions with her fellow women realized that she was not responsible for her widowhood and had the right to live a life of her own. She again started wearing colorful clothes and working outside her home. She dared to put on a red saree and a red bindi, despite prohibitions on widows wearing these colors and adornments.

Addressing a gathering of 1,500 people at a rural women’s conference organized to mark International Women’s Day, she said, “We need to rethink the culture and norms that demean the lives of women.”

Now she doesn’t care about the raised eyebrows or questions from her neighbors as she walks out of her house each morning. “Strength is here …” she taps her heart, “… inside this place. If it says you’re right, then nothing in the world should stop you.” Once suicidal, Sudevi is now full of life. Widowed women in the village come to her to learn how they can live as fully as she does.

Such courage these women show in defying the norms that restrict their being!

Are Rituals More Important Than Life Itself?

The lives of women such as Devki and Sudevi are so often determined by a host of norms, cultural practices or informal rules. Indeed, the entire journey of life – from before the birth of a child to the rituals following death – is gendered in ways that limit, dehumanize and brutalize women. None of these norms is based in law, but attempts to disregard them are often met with serious ridicule and exclusion from family and community. Anyone defying these norms must possess strong convictions and courage to withstand the fierce societal backlash.

Such norms and practices undermine the perceived value of women and girls, and normalize the idea that men and boys have a natural claim to superiority. These layers of discrimination and suppression often discourage women and girls from aspiring to reach their full potential.

The Sustainable Development Goals (SDGs) envision a world in which gender equality is a reality and women participate fully and meaningfully in all spheres of life. They also recognize the centrality of gender equality to achieving all 17 SDGs. Ending all forms of discrimination – including inequality of ownership of land and other assets – against all women and girls is an explicit target of the SDGs.

On paper, there are many pieces of legislation in India that mandate equality among men and women in several spheres, including ownership of land, equality of pay and a life free from violence. That all of these are far from being translated into reality is no secret. Deep-seated cultural norms pose a significant challenge, since they determine the mindsets of the policymakers as well as those responsible for implementing them.

At Landesa, we work to overcome the barriers that women encounter by supporting the development of progressive laws and policies and the awareness-building and sensitization activities necessary to ensure they’re successfully adopted on the ground. By taking action to correct social norms that undermine women’s agency and access to opportunity for social and economic empowerment, we can begin to bridge the gap between policy and practice that still exists in many parts of the world.

Maya Angelou said, “Each time a woman stands up for herself, without knowing it possibly, without claiming it, she stands up for all women.” It is thus important to encourage and recognize the contribution of each Devki and Sudevi in uplifting all women. They are the role models who defy discriminatory norms through their indomitable spirit. Equally important – we must create opportunities for more Devkis and Sudevis all around us.

Shipra Deo is director of Women’s Land Rights in India for Landesa.