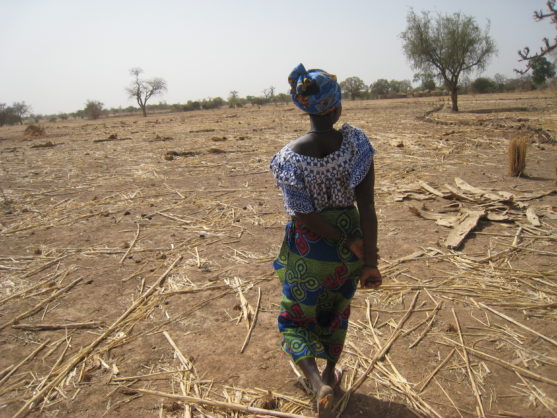 The plight of women has largely been ignored, not only by local officials and lawmakers, but also by the way in which data about land rights is understood and processed.

When Rajkumari Devi’s husband died 12 years ago, the world that centred on the mud hut they shared in a village in north India fell apart. Reeling from the loss of her husband, she was unable to secure title to her home and the scrap of farmland nearby that they had worked together.

Her in-laws used threats and violence to try and force her and her three children from the hut, and when the government appropriated the farmland to build a railway, compensation went to her relatives, not her. Stripped of the family’s source of income, her children had to leave school in order to work.

The outline of this story is repeated each day the world over: women who are widowed or divorced lose their rights to property, which almost always reverts to their husband’s family.

The plight of these women has largely been ignored, not only by local officials and lawmakers, but also by the way in which data about land rights is understood and processed: those whose views are taken into account when assessing tenure security are typically household heads, which largely means men.

Even when women are interviewed, they are often only asked whether they hold deeds of title: a question which fails to take into account the numerous challenges women face in asserting those titles, including the attitudes of police and courts, or other discrimination or disadvantages they may experience.

As a result we have a limited understanding of the problem of insecure land and property rights worldwide, and face consequential challenges in knowing how to tackle it. Indeed, the world lacks a credible measurement of tenure security, as it is perceived and experienced in practice, by men as well as women. But as so often is the case, it is women who have been most poorly served.

A major new international survey has finally begun to change that.

Prindex, a joint initiative of the Overseas Development Institute and the Global Land Alliance, asked a demographically representative sample of adults in 15 countries how secure they felt in their homes and on their land.

By focusing on adults, rather than household heads, the survey hears from all segments of the population,  including the young, the elderly and the more vulnerable, groups that are too often ignored.

By asking about perceptions, the survey goes way beyond formal and legal measures of security. Perception-based measures aren’t perfect: we need more than one type of data to give us a full picture. But understanding what people believe to be true gives us something indispensable: insight into the efficacy of the official structures captured by so-called “objective measures”, such as the possession of documents to prove one’s rights.

While at first glance Prindex data did not reveal a huge difference between women’s and men’s perceptions of their own tenure security, when asked to contemplate a scenario in which their spouse died or they were divorced, women expressed considerably greater tenure insecurity than men.

This is a stark land rights gender deficit, which has been statistically invisible until now. It is a gap into which women like Rajkumari have fallen, uncounted.

Even women who do not get divorced or lose their husbands suffer from this inequity: when a woman knows she could lose her home if she gets divorced, she is less likely to assert herself within her marriage, and more likely to stay in a harmful relationship. This can have dire consequences for her, for her family and for her community.

These concerns are not trivial: when data from men and women were combined, “family disagreements” featured in the top three most frequent explanations for tenure insecurity in 11 of 15 countries for which Prindex has released data.  “Family disagreements” were second only to the possibility of the owners or renters asking the respondent to leave.

In comparison, when household surveys only ask the most powerful member of the household for their documentation or  for an assessment of their tenure security, what happens within the family remains a black box. Not only women, but less powerful men and young people, go unseen. Key sources of insecurity that affect them directly can be entirely overlooked or ignored.

These are fundamental questions, in development, in data, and in land rights. Whose experience counts? Whose voice matters? What issues should be prioritised and addressed?

Rajkumari has a daughter. Will she, as an adult, face the same struggles as her mother? If so, then with the work Prindex has begun, at least we can hope to be aware of her plight, and thus better prepared to help address it.

Prindex has just released its first tranche of 15 countries worth of data. You can explore it here. By 2019 the survey will cover 140 countries.