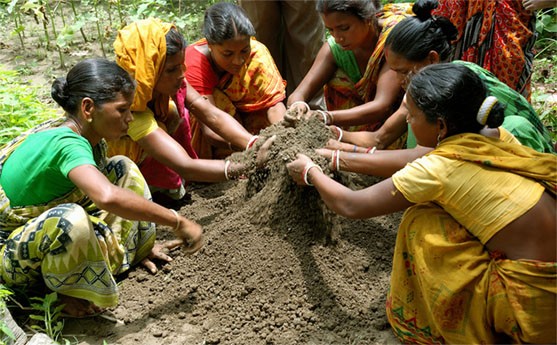 By Landesa and the Rights and Resources Initiative (RRI)

Arguably the biggest problem facing humanity—climate change—has a surprising solution: legally recognize and enforce the land rights of rural women in customary tenure systems. This November, it is essential that the world’s nations gathering in Bonn for the United Nations’ annual climate change conference do not lose sight of this tremendous opportunity. A Gender Action Plan is slated to be debated and adopted. Twenty thousand attendees are expected, presenting a catalytic opportunity for governments, activists, and funders to collaborate to strengthen women’s land rights to combat climate change. The fate of the planet, rural women’s fate, and our fate will be in the balance.

We already know that strong land rights for women reduce poverty and increase economic empowerment and personal agency. A growing body of research also suggests that when women have secure tenure rights, climate change resiliency increases for women and their communities. Linkages between climate change mitigation and women’s tenure rights are especially strong for indigenous and rural women who practice community-based tenure. In these settings, women commonly rely on community lands in order to fulfill responsibilities that are essential to their communities’ livelihoods, cultural integrity, and ability to sustainably steward community forests that hold at least 24% of the aboveground carbon found in the world’s tropbical forests—a sum equivalent to almost four times the global greenhouse gas emissions of 2014.  This initial research suggests a dual approach: treating women—those hardest hit by climate change—as agents of prevention, while prioritizing women’s participation in adaptation measures.

Governments and climate change activists have a pressing opportunity to act on this data, but further research is critically needed to explore the potential for combining climate action strategies with women’s rights to land. Critically, such strategies should include efforts to fortify the rights of indigenous and rural women, whose rights to community lands and resources are seldom protected by statutory laws.

Customary land is home to the majority of those living in poverty around the world.

At least 2.5 billion people derive their livelihoods from rural land-use economies, and communities hold and manage over half of the world’s land area through customary tenure systems in which land is held at the community level.  Those living under individualized and community-based customary systems are likely to be among the majority of those living in poverty worldwide. They are especially dependent on rural land for their livelihoods, yet they often lack legally recognized land rights under national laws. This holds especially true for people in the lowest income countries, and those experiencing the most extreme forms of poverty due to intersecting discrimination based on gender, ethnicity, class, or caste. Unrecognized customary land rights leave communities at risk for exploitation through private investment, conflict, and expropriation. They can be left scrabbling for survival, constrained in employing the sustainable land use practices and investments needed for climate change action.

These same populations are among those most affected by climate change. According to recent research, 52% of agricultural land worldwide is affected by climate-changed induced drought, just one example of a climate change-induced “slow-onset” disasters. Land degradation, another example, is estimated to affect 1.5 billion people; the majority live in poverty.

Climate change also jeopardizes food security in customary settings. The 2.6 billion people dependent on agriculture include rural smallholders and landless populations—who make up 80% of those experiencing hunger. Because land is an essential asset for rural people, climate change and food security link to other massive problems, including resource conflict and migration. Rising temperatures and fickle rainfall mean available land no longer grows enough food, driving men and boys away from communities in search of work.

Women within customary systems face severe discrimination in every aspect of land use, decreasing their ability to fight climate change.

While formalization can protect communities as a whole in customary settings, women face discrimination that can be magnified and entrenched when governments formally recognize customary land in a manner that overlooks women’s rights, voices, and specific needs. Women may be legally constrained in customary systems, even when some formal recognition of these systems exists. Often, they access land through male relatives, and are excluded from inheritance, government and aid agricultural programs and access to customary justice. Women are socially constrained, limited by lower rates of literacy and mobility, and greater care responsibilities. These gender inequalities call for specific efforts to strengthen the rights of individual women within customary settings, both in communities as a whole and within households.

As managers of communally and individually held lands, rural women often bear the primary responsibility for gathering water, timber, and other natural resournces such as food, fuel, traditional medicines, fodder for livestock, materials to make clothing, and other cultural items. They are commonly responsible for the maintance, use and sale of specific resources that their families depend on to maintin their land and forest-based diets, as well as cultural and religious activities. Given these uniquely gendered roles, women are most affected as slow-onset disasters extend their deadly fingers into communities’ daily lives. They walk farther to gather water during dry spells, and to collect the forest products for which they are primarily responsible for managing. They may be more likely to die in rapid onset natural disasters, as they are less likely to have advance warning, are more likely to be inside their homes, and can be socially constrained to wait for men to make evacuation decisions. When men migrate, women’s ability to mitigate and adapt to climate change may be reduced, even as their land-based workload and responsibilltiies as land managers increase. They work degraded soil with less secure land rights, as well as contrained access to inputs, irrigation, and technology, which are easier for men to obtain. These factors working together can decrease household nutrition and income, and community cohesion, leading to more extreme poverty and even higher rates of migration.

New innovations for securing land rights for women alongside men in customary settings suggest that a gender-responsive approach may bolster mitigation and adaptation to climate change. In Ethiopia, an initial study of recent joint titling and registration of married couples on customary land shows increased conservation measures. Evaluation of a program in Niger shows that women, given ownership of plots and trained in bio-reclamation of degraded land, are revitalizing farmland while increasing their incomes and improving household nutrition. Global movements linking human rights and development with land rights provide unifying frameworks for these innovations. Secure tenure for women and men is included in the Sustainable Development Goals, and rural women’s rights to land have been necessitated by the Committee for the Elimination of Discrimination Against Women and other human rights bodies.

Securing rural women’s rights to land may be key to the survival of our species. If attendees give women’s land rights a central place in climate change efforts, recognizing links to sustainable development, peace, and prosperity, a more verdant future for all of us is possible.