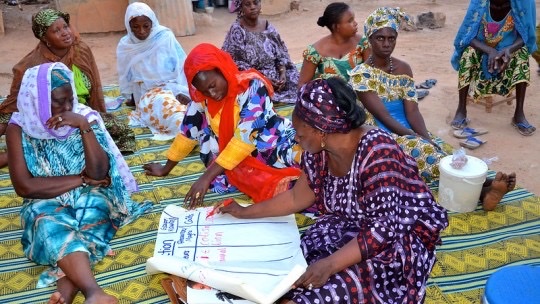 This blog was originally published by Land Portal.

By Joy Imbuye, Landesa intern and graduate student at the University of Nantes

In sub-Saharan Africa, less than 13 percent of women aged 20-49 have rights to land, according to research by the World Bank. Therefore, securing their land rights remains a very crucial matter to boost their socio-economic empowerment.

Most former French colonies in Africa gained independence in the 1960s. They largely inherited the civil law system of the French, adding this to their traditions and customary law. Often, the colonial laws were discriminatory. Since colonial times, customary land tenure did not guarantee land tenure security for everyone. In family and land laws, there was gender inequality and other forms of discrimination. Most former French colonies started reforming the land rights in the 1980s to remedy some injustices. Many reforms focused on either land nationalization or registration programs to establish private ownership.

Modern land reforms remain indispensable to tackle gender inequality in areas where customary discriminatory practices are dominant. In cases where new laws and policies have been promulgated in Francophone African countries, just like other sub-Saharan African countries, nations have struggled to define realistic and progressive implementation strategies.

This blog aims to review some of the good practices as well as the challenges faced in advancing women’s land rights in select countries in Francophone Africa. My review, based on existing research and analysis, project reports, and legal provisions, focused on issues related to inheritance rights for women and girls and women’s participation in land-related decision-making and governance.

What are some promising practices and challenges in promoting women’s land rights and access in Francophone Africa?

However, the solid statutory framework fails to secure equal rights for a considerable percentage of women in the country. The Code of Persons and Family does not apply to women married under customary law. Consequently, under customary law, widows often cannot inherit from their husbands, and the daughters are ignored because they are expected to acquire assets through marriage. This reality is an illustration of a gap between law and practice.

Despite the fact that the statutory law is affirmative of equal inheritance irrespective of gender, it is essential to point out that in countries such as Senegal, where a majority of the population is Muslim, religion has a greater impact than statutory laws. As a result, the Senegalese Family Code is very much neglected in the rural areas, thus leaving women in these areas without equal access to land and property. The statutory law ends up being primarily applied when women access the urban courts. That is an example of a conflicting dual system, which leads to the persistence of discriminatory practices regarding women’s rights and access to land. Political will and awareness-raising to address cultural reluctance to reconcile the differences within the country would be vital to promote women’s land rights.

Burkina Faso’s Decree on the Responsibilities, Composition, Organization, and Functioning of the Local Structures of Land Management of 2010 encourages women’s participation in village land commissions. The Decree does this by requesting two representatives of women’s organizations in the village land commissions. Moreover, nationally, Burkina Faso requires women to make up 30 percent of the candidates in the ballot lists to reinforce women’s participation in governing structures.

Although Burkina Faso has adopted strategic statutory laws and policies, the reality in the rural areas portrays the dominance of customary practices. Customarily, land is considered sacred and therefore, the management rights solely belong to men, and they do not want to end the tradition.

In Benin, the land management committees that should implement land laws now have fixed quotas for women. In village committees, two out of twelve seats are reserved for women, a phenomenon that shows an inclusive effort, even if the number doesn’t remain equal.

Even as such efforts to include women in land governance in Benin look promising, the threshold for actively involving women in land matters in the rural areas remains low.

In Senegal, land management at the local level is overseen by the land commissions and municipal councils. The latter rely on the land commissions for recommendations to decide on land allocation. The national law obliges all government institutions to implement gender parity at the local level. In 2015, the number of female municipal councilors made up 47 percent of the total, compared to 15.9 percent prior to 2014 local elections. The implementation of the law is a way of ensuring that women participate in leadership in land-related matters.

Concerning climate change, Togo’s Ministry of environment and forestry resources stands out through the adoption of strategic orientations to improve women’s access to productive resources to make the REDD+ process easier. The Ministry recognized that among the indirect and underlying causes of deforestation and forest degradation were land tenure insecurity and the non-respect of land rights in rural areas. This recently adopted effort calls for close evaluation to gauge the impact and determine the way forward.

How can civil society address the challenges?

Although the legal frameworks look promising, the challenge persists in the implementation of the laws and policies. In addition, contradictory legal provisions in countries where two legal systems are recognized create a loophole, creating an opening for discriminatory practices to prevail. As much as awareness-raising is crucial to ensure that progressive laws are implemented and that women get more access to land and that their land rights are secured, dialogue with local authorities and national institutions to advocate for them to help bridge the gap is equally essential.

These observations call upon civil society organizations to build and broaden alliances and closely work with the national and local authorities to enhance women’s land rights in practice as well as in law. Such strategies can result in achieving food security goals and socio-economic empowerment of women in Africa.