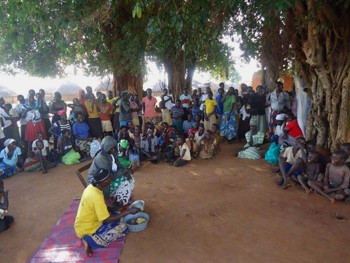 It is late afternoon in Parwech, northern Uganda, and a sizeable crowd has gathered under a large banyan tree. The community has come together this afternoon to discuss an important issue: women’s land rights in northern Uganda. The facilitator asks the crowd: how many among you have experienced some problem over land?

All hands go up.

It is no surprise. The decades-long war that ended in 2006 displaced nearly two million people and stalled development in this area of northern Uganda. Since 2006, people have gradually returned from displacement, and have set about the work of rebuilding their communities. These efforts to develop the region are challenged, however, by ongoing conflict over land.

An elderly woman stands up and addresses the crowd. “After the conflict, I came back to my village with my children. At first, my family welcomed me, but after a while, they gave me problems and told me to go away from here. They said there was no place for me on my family’s land – but where can I go?” Amid murmuring agreement, others share their experiences and concerns. The issue of land touches everyone, and is fundamental to the daily lives and livelihoods of this rural community.

Other women then share their stories. While each woman’s story differs in its details, a common theme is clear – women have highly insecure rights to the land they depend on to survive.

Land conflict is widely recognized as a major problem in this area of northern Uganda known as Acholiland, where an estimated 90% of land is administered under customary rules, and almost all rural land is held communally. Though Ugandan law grants authority to the customary system, decades of conflict have fractured the households, communities, and institutions that make that system work. Moreover, these customary rules are not consistent, are not codified, and are unevenly upheld by a traditional leadership whose authority has been eroded by the conflict, and by a larger context of land grabbing and land speculation, leaving the population – and women in particular – vulnerable in the face of uncertainty over land rights.

Of the seventy people in the crowd, fifty are women. Women face an especially difficult time negotiating and defending their rights to land, because their rights are dependent on their marital status or relationship to men. When a woman’s domestic situation changes, her rights become less clear: under the formal law, she has rights, but under custom, as it is currently practiced, she is essentially disenfranchised.

Korina Agoma, a 57 year old widow and single mother, is one such woman, and she was eager to share her story with me. “I do not understand why I am a refugee in my own community, when my own family has land and they deny me.”

Since 2009, the Landesa Center for Women’s Land Rights (Landesa) has worked within customary tenure systems to ensure women’s secure rights to land. Many organizations are working to improve the land situation in Uganda, and in Acholiland in particular. Landesa’s Uganda project takes a novel approach: by focusing specifically on women’s land issues, the project hopes to address the cultural and institutional barriers to realizing women’s rights, and thereby to improve equality, reduce conflict, and pave the way for long-term peace and development for the region.

In order to understand and address land issues like those that Korina faces, Landesa is working in partnership with Women and Rural Development Network (WORUDET), a local women’s empowerment NGO, to bring about the changes in behavior and mindsets that discriminate against women and deprive them of secure rights to land. This project aims to clarify and vindicate women’s rights to land through grassroots engagement with 250 women and their communities in Pader and Agago Districts. The goal is to help them to improve their land tenure security, while refining a model to secure land rights for women that can be replicated elsewhere in northern Uganda and beyond.

“I am so happy that the project has come to help women in my community get justice,” says Korina, “Thank you for giving me the chance to tell my story.”