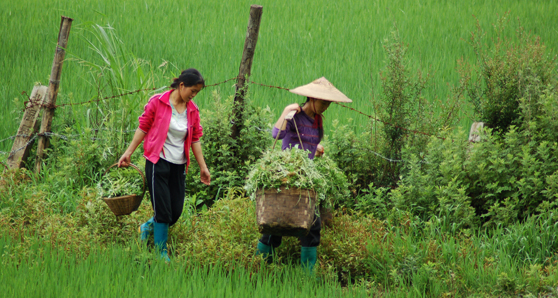 While the law establishes that land can only be expropriated for the public good, that farmers need to be notified in advance, and that those affected should be compensated for the land lost – for the cost of resettling and for the value of the structures and standing crops – the picture that has emerged in practice is worrisome.  Land expropriations have been rampant and a high number of farmers have been rendered landless.  The process of consultation is not always inclusive and farmers who lose their land receive only a meager compensation based on the average agricultural output of the previous three years.  As a result, grievances arising from land conversions are now the most frequently-cited cause for rural unrest and protest.

Women may be in a particularly vulnerable position.  In a system based on patrilocal marriage, it is easy to see how the “30-year-no-change” law against big reallocations of land-use rights can effectively lead to a weakening of women’s land rights at marriage.  Furthermore, a large proportion of rural households lack land documents, but even among those families who do possess them, women’s names are rarely included in the land documents.  Moreover, when land is converted, Village Collective cadres and representatives—whose decisions are typically influenced by traditional and gendered norms—have the authority to determine who is eligible for monetary compensation and how the remaining land is reallocated.   This means that while the law does not directly discriminate against women and their land-use rights, entitlement to compensation, or recourse to the court, in practice women are not always treated equally.  As a few case studies from Guangxi argue, women’s eligibility for compensation can vary each time land is taken; they can receive less compensation than men; if they had married out or their husbands have urban residency, they might not be eligible for compensation despite living in the village, having kept their residential status, and possessing land rights.

To explore some of these issues, we conducted a survey in 5 provinces (Hebei, Henan, Sichuan, Shandong, and Zhejiang) where we interviewed 380 rural women.   According to our survey, in 28% of the villages where there have been land takings, villagers had not been consulted.  Our results suggest that the extent to which villagers were consulted varied.  Villagers were less likely to be consulted if they lived in more remote villages, but those who were wealthier were more likely to have been consulted or to be aware of the consultation that had taken place.

Women were significantly less likely to have been consulted:  38% of the respondents said women were not consulted and only 29% said women had been consulted by the Village Committees.  Of those who reported that villagers had been consulted,  19% said women had not been consulted.  According to our statistical analysis, this gender gap is explained by two opposite factors.  On the one hand, the gender gap in consultation widens and women are less likely to be consulted in more remote villages.  On the other hand, the gap decreases and women are more likely to be consulted if their husbands are away for at least half of the year and they become the de-facto heads of household, reflecting perhaps their more visible role in their communities as well as an enhanced access to additional sources of information.