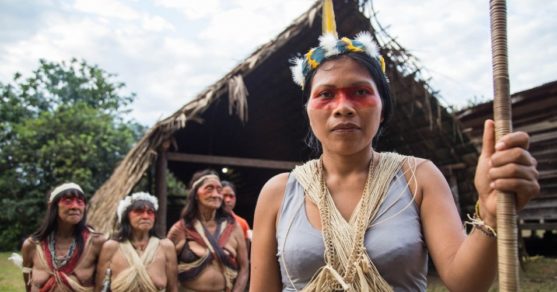 Achieving gender equality requires a fundamental shift in the balance of power over resources. Globally, from urban financial centers to remote communities, from international bodies to parliaments to fields, men dominate decision-making and control of resources. But worldwide, women are pressing for change.

Last month, a court in Ecuador issued a landmark ruling for the indigenous Waorani people, protecting their land from oil exploration. Nemonte Nenquimo led the tribe’s resistance, and unequivocally asserted her people’s rights to their land: “The government’s interest in oil is not more valuable than our rights, our forests, our lives.”

Nemonte’s leadership is a thrilling example of women taking hold—ownership—of their land and of destiny, for themselves and their families and communities. But Nemonte stands in jubilant and hopeful contrast to a stark reality worldwide: a web of barriers stands in the way of women taking hold—of their own agency, of the world’s resources, and of seats of power.

The time to overturn this reality and speed transformation is now. Women worldwide experience discrimination that stifles or extinguishes our voices, opportunities, and our very lives; from widespread injustices like sexual harassment, the gender pay gap, and the burden of unpaid care work, to appalling realities like sexual violence, human trafficking, child marriage, and honor killings—the effects of gender inequality are well known.

What should be at the center of this fundamental shift?

Women living in rural areas make up a quarter of the world’s population and experience the harshest forms of poverty and marginalization. Land is their most basic and most life-giving asset, providing food, housing, and income. Investments in women’s land rights are a prerequisite to full and substantive gender equality that benefits those most in need.

But women’s land rights are also fundamental for this needed tectonic shift in power—an overhaul of the current distribution of the world’s resources, captured in the crasser version of the Golden Rule: “He who has the gold, makes the rules.”

Property rights have created certainty, investment, and economic growth for millennia; but this has mostly benefitted men. Especially in emerging economies, women still access land mostly through male relatives, and are often themselves still considered or treated as property. Law and custom limits women’s rights to land in half the world’s countries. Women are often left out when governments distribute land, or provide services for agriculture and access to credit. Women have been left out in data collection on land. This leaves women’s marginalization, and the benefits of securing women’s rights to land—though obvious to individual women worldwide—inadequately explored.

Women have a right to participate, and their perspectives are critically needed, in governance of the world’s most important resources, including decision-making and policy creation on national and global level issues: food security, peace-building, international trade, investment, climate change, and land use planning and management.

For women worldwide, strong land rights create a bedrock of dignity and a stairway for empowerment. Securing women’s land rights builds women’s perception of their own power, and foundationally disrupts the status quo of women’s exclusion. With land rights, women go “from being property to owning property.”

Evidence shows that women’s rights to land transform the power balance within households. This lifts women high enough to grasp the ladder of progress for themselves, improving outcomes for healthcare (including access to contraceptives), nutrition, and education, while reducing rates of HIV infection, gender-based violence, and other threats to women’s safety.

Without land rights, other interventions lack a necessary foundation for effectiveness and sustainability, leaving women on shaky ground.

The Committee on the Elimination of Discrimination Against Women has declared women’s rights to land and natural resources “fundamental human rights,” recognizing their power to halt the deprivations and secure the benefits described above. But land also goes to the heart of the gender equality movement: women have an equal right to solid ground, in every venue of power.

An earlier court hearing for the Waoroni lacked interpreters and was located far from the tribe’s territory; in response, Nemonte led a protest. The Waorani joined in unified, unrelenting traditional singing, until the court postponed the hearing.

What will a future marked by women’s empowerment be like? It will feature women’s voices, powerfully united to overcome injustice and realize fundamental human rights.

Beth Roberts is Program Manager of the Landesa Center for Women’s Land Rights.