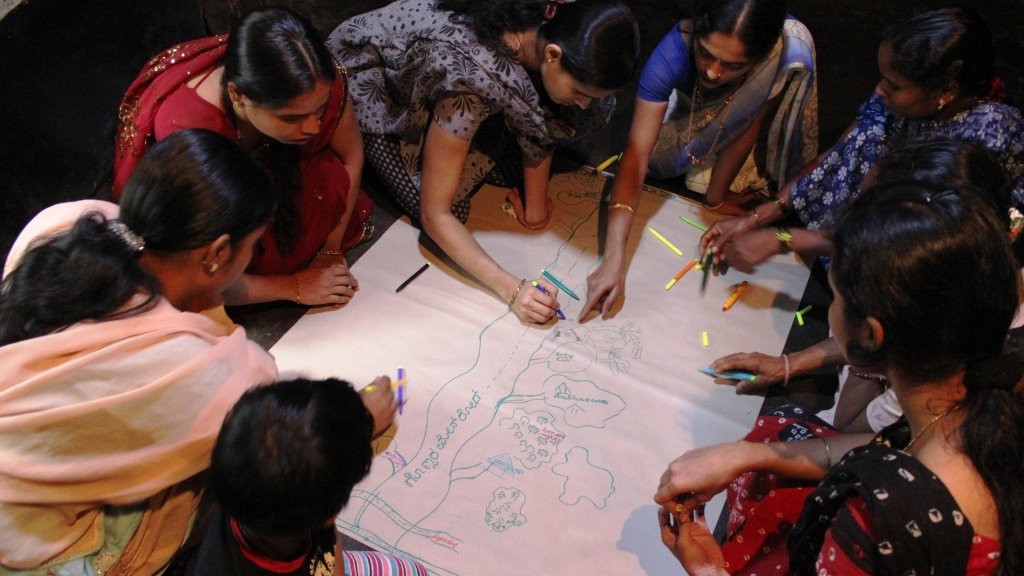 This blog was originally published by Land Portal.

By Shipra Deo and Pinaki Halder

The Government of India has announced an ambitious effort to map residential areas in villages(link is external) using drone technology and provide “property cards” to these rural owners. In its first phase, the Svamitva (“Ownership”) scheme will map 100,000 villages in six states, with the scheme ultimately expanding to all of India’s 662,000 villages.

Since independence, government survey of rural land has mostly prioritized agricultural land. In several states the inhabited areas of villages – known as “abadi” land in Uttar Pradesh and Madhya Pradesh,” lal dora” land in Punjab and Haryana, and “gaothan” land in Maharashtra and Gujrat – have largely remained out of the purview of such surveys.

As a result, thousands of village communities across India do not possess any record of rights, and their claim of ownership depends on the actual possession of their land and dwelling.

To address this, the central government’s Svamitva scheme will conduct large-scale mapping of rural village land using drone technology. Spatial data generated in this way would then be physically verified in collaboration with village leaders (Gram Sabha and Gram Panchayat), household owners and officials of the Revenue Department. The state government will later issue a notification to establish ownership rights and investigate any objections before issuing the property cards.

The central government lists numerous well-meaning benefits of this massive scheme: enabling rural people to use property as a financial asset; creating accurate land records for rural planning; reducing property related disputes and legal cases; creating accurate land records for rural planning; increasing property tax in the panchayat and State; and creating GIS maps that can be used  by any department and aid development of Gram Panchayat Development Plan (GPDP).

While such efforts to map and record residential land are an encouraging step toward stronger land rights for rural communities, it’s important for officials to consider the limitations of a technological approach to account for years of customary practice.

Ishteyaq, a land rights practitioner in Mirzapur District of Uttar Pradesh, says it is a great scheme for the long-term development of villages, but at the same time he sees a lot of complications in implementation. Since people have been residing in these houses – which are usually very small – for several generations, it is difficult to determine who would be the titleholder. “The disputes are bound to happen and the possibility of foul play by the powerful can’t be ruled out,” he says.

Encouragingly, the scheme lays out an information and communication initiative by the states to sensitize local populations about the surveying methodology and its benefits. It also envisions a role for Gram Panchayats in resolving post survey objections received by property owners. However, community participation should probably not be taken for granted.

Landesa’s years of experience working on the ground suggests that even when community participation in land governance is explicit in written processes, rural people often remain on the fringes during implementation. For example, in Uttar Pradesh there is a clearly laid out process in which village-level elected leaders play a role in land allocation to landless households. However, in the course of our field work we learned that they weren’t aware of their role in land allocation. A quick check revealed that the training imparted by the Department of Panchayati Raj to newly elected representatives didn’t include anything about land in its curriculum. In response, we then worked with the Panchayati Raj Training Institute to incorporate land allocation in its curriculum.

Similarly, recent assessments of the implementation of the Digital India Land Records Modernisation Program (DILRMP) in several states have revealed a few limitations, one of which is the lack of community participation in land administration exercises. Without effective community participation, conflict and discontent are bound to result from processes that attempt to define land rights.

People have been living in these areas for generations and know the best about the area. In collecting data on land ownership and conducting ground validation, it is important to include women and other marginalized communities and hear their voices and concerns. Local civil society groups can play an important role in helping marginalized families to understand and participate in the process.

There are other areas that entail due attention if the scheme is to provide full benefits for rural communities.

First, the guidelines for the Svamitva Scheme do not provide any direction on providing joint ownership to men and women in the property cards. Given the patriarchal biases that have historically excluded women from land and property ownership, concerned officials will likely see only a male resident as the default owner of the household property. It will be helpful to have explicit guidelines to prioritize women in the issuing of property cards. Most of the States already have regulations for joint allocation of titles in land allocation by the government, and these guidelines can be aligned.

Second, surveyors should record the sex of the property owner as part of the data collection process. Sex-disaggregated data is critical for estimating the actual rate of land and property ownership by women in India.

Third, it is important that the rights of landless families – most of whom belong to marginalized communities – are addressed with sensitivity. There should be concurrent provisions for allocation of land to landless households in the villages, so that they can be saved from eviction and protected against the domination of powerful people in the community. States may consider expanding abadi land by allocating additional lands for rural housing.

Fourth, it is important to have clear guidelines for the protection of customary rights of indigenous communities.  A transparent and fully participatory public process could help facilitate such protections.

With the above concerns addressed, the Svamitva scheme has the potential to help rural households enjoy the full benefit of stronger land and property rights. Particularly in the wake of the COVID-19 pandemic, when an outward migration from urban centers to villages has put added pressure on rural land, these reforms are both important and timely.  Stronger land rights will help rural people forge a stronger connection to their villages, helping build resilience and security as they look for new opportunities.