Why Land is a Feminist Issue 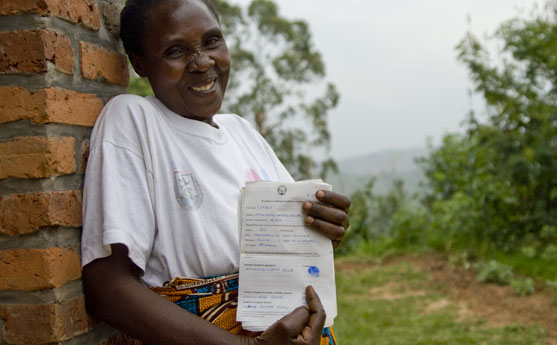 This blog was originally published by the International Land Coalition.

We feminize our planet by calling it “mother earth” – but land as a feminist issue goes beyond metaphor. It is because the majority of the world’s poor depend on land for food, shelter, livelihood, and often their identity, but lack legal control over this source of their survival.  And this experience has a bias. Our relationships to land, forests, water and natural resources are not gender neutral, and our rights to these resources are gender biased.

Why is land a feminist issue?

Because women are half of the one billion rural poor who eke out an existence on less than $2 a day, and their prospects of breaking the yoke of poverty are bleaker than those of their male counterparts.

Women make up on average less than 20 percent of the world’s landholders, according to UN Women. Rural women’s nexus to the land — their lifeline, home, job and social security — often teeters on the strength of their relationship to their father, husband, brother or son.  They lack direct, unmediated rights to the land. They face layers of discrimination fueled by their gender, race, ethnicity, affiliation, orientation, age, or social status.

Because laws and social norms impose barriers to women’s rights and access to land in more than half the world.

Laws, and more often gender bias and discriminatory norms, entrench women’s insecure tenure; they may be ejected from their home upon the death of a husband; they lack recourse when an abusive partner kicks them out; they are excluded from weighty decisions about the sale or lease of their land; they have no claim to compensation when the land is taken by an investor, corporation, or the government; they lose access to firewood, fibers, food or medicine from forests cordoned off as carbon sinks when those rights are unacknowledged.

When women have solid rights to land — in some contexts — they may be less likely to face gendered violence. A study in India concluded that women who own land are eight times less likely to experience domestic violence.  I heard from some women who have their names on land documents in Odisha and West Bengal in India and on the outskirts of Yangon in Myanmar relate that “men cannot be violent because the title to the land is in my name” and that “I cannot be chased away.”

In some countries, even when laws uphold equal property rights of spouses, women in partnerships not recognized as formal marriages, whether informal unions or polygamous relationships, lack such protections. In Rwanda, Landesa found that about one in three women in Kayonza and Nygatare Districts are in informal unions and as such lack formal legal protections of their land and property rights.

In some areas, women who marry into their husband’s village can be seen as outsiders in their new community while simultaneously excluded from their birth community, leaving them with no claim to land rights in either place.  A 2014 study in 21 provinces in China found that 18 percent of married rural women lack documented rights in both their parental village and their husband’s village.  If the government or investors take or convert the land, women who lack property rights within their communities stand to lose everything and receive no compensation.

Because while they produce the bulk of the world’s food, women continue to go hungry, affecting their health and wellbeing.

Globally, more than 400 million women farm.  In sub-Saharan Africa, 60 percent of employed women work in agriculture. In South Asia it is 70 percent. Yet, women and girls constitute 60 percent of the world’s chronically hungry people, according to UN Women.  Women tend to be the first to sacrifice their food portion to ensure their families can eat. In many contexts, women – who primarily cook and serve the food – eat last or are left with scraps. Malnourished women are more likely to be anemic. If they become pregnant and survive childbirth, their babies are more likely to be underweight and face greater risk of dying by age 5.

With no guarantee to their land, women have fewer means and incentives to invest in the land, access seeds, fertilizer and equipment, to increase its productivity and yields. The Food and Agriculture Organization estimates that if women had equal access to non-land resources, yields on women’s land would increase by 20-30 percent and the number of hungry people in the world would drop by 100-150 million.

Because women do most of the unpaid and undervalued work of collecting water, cooking, cleaning and care-taking of children, the elderly and sick.

According to studies across diverse countries, nearly 90 percent of the time spent on household food preparation is women’s time.  Dictated by gender norms, women are generally expected to spend the bulk of their days cooking and caring for the house, which limits their ability to gain income outside the home; when they do, their pay is typically lower than that of male counterparts performing comparable jobs.

When women do have land rights, they are able to earn more and create a resiliency cushion.  Women with secure property and inheritance rights in rural Tanzania earned up to 3.8 times more income and held 35 percent more savings.

Because land management and control of proceeds from the land continues to be seen as male territory.

Women’s participation and leadership in rural councils responsible for major land-related decisions, including allocations and investments, remains the exception. Women rarely head or chair rural councils in Bangladesh (0.2 percent) and Cambodia (7 percent), according to UN Women.  In Tanzania, where progressive laws mandate at least 25 percent council-level participation by women but do not require a gender quorum, women continue to be absent, silent or marginalized in discussions about major decisions affecting the entire community.  A WRI study of Tanzania, Mozambique and the Philippines concluded that “women’s lower rates of literacy, limited mobility, and care responsibilities can also present barriers to the exercise of their rights.”

In Rwanda, hailed for its unparalleled achievements on gender equality and female-dominated parliament, a recent study by International Alert found that men continue to dictate land-related financial decisions, such as sale and use of proceeds from crops and leasing of the land because of prevailing notions that “women come to the marriage empty handed.”

Because lower literacy rates for women mean lower awareness of rights and the avenues for asserting and claiming their rights.

Two out of three illiterate people in the world are women, severely restricting their access to information about their rights.  Whether in India, Kenya or Uganda, a common obstacle to secure land rights is women’s general lack of awareness of existing laws and regulations and their legal rights to use, own, inherit, and make decisions about the land.

Because women are hardest hit by climate change. Research shows that women in the regions of the world most affected by climate change, Africa and South Asia, bear the brunt of increased natural disasters, displacement, unpredictable rain fall, decreased food production, and increased hunger and poverty. Women farmers are particularly at risk.

Because when disasters or wars strike, women’s already tenuous right to land is further weakened, extinguishing access to services and compensation tied to land ownership or use.

This week at the AWID International Forum on Women’s Rights and Development, activists from across the globe will gather in Bahia, Brazil, to link across movements for a feminist future premised on “Collective Power for Rights and Justice.” On Saturday, land rights for women will be spotlighted at a panel, Reaping what we sow: why women’s land rights matter and how to make them grow, hosted by Landesa Center for Women’s Land Rights and alumnae of the Women’s Land Rights Visiting Professionals Program from Kenya, India and Uganda.

The inspiring gathering at AWID 2016 will further propel the momentum of more champions taking a gender lens to these goals, leveraging the global Deliver for Good campaign calling for investing in women and girls as solution-crafters for today’s toughest challenges.

Because secure, recognized, upheld, equal land rights for women — a concrete, cross-cutting accelerator for these goals — is both a feminist issue and a feminist innovation.

Tzili Mor is Director of the Landesa Center for Women’s Land Rights.