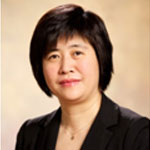 Prior to her current role, Xiaobei was secretary general of Women’s Watch China, part of Peking University Women’s Law Studies and Legal Aid Center. She worked to protect women’s rights with the aim to build gender awareness, explore strategies to resolve problems, and promote the issue and improvement of new laws and regulations to foster gender mainstreaming and the protection of women’s rights.

Xiaobei Wang earned her master’s degree and PhD in sociology from Renmin University of China.