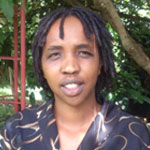 For the past six years, Paine Eulalia Mako has served marginalized female pastoralists in Northern Tanzania. As gender coordinator for Ujamaa Community Resource Team, Ms. Mako helps pastoral women build leadership skills and to understand their rights, including their rights to land and property.

Ms. Mako helps to mobilize women to take leadership positions in their village and, oversees Women’s Rights and Leadership Forums. Ms. Mako has successfully advocated for women’s participation in the decision-making bodies led by male traditional leaders, enabling the women to advocate for themselves and work with the village leadership to change customary practices harmful to women’s land rights.

Having received her BA degree in social work, Ms. Mako developed a passion for helping the less privileged from a young age. After graduating in 2009 from the Catholic University of Eastern Africa in Nairobi, Ms. Mako worked as an intern and practitioner in several NGOs.